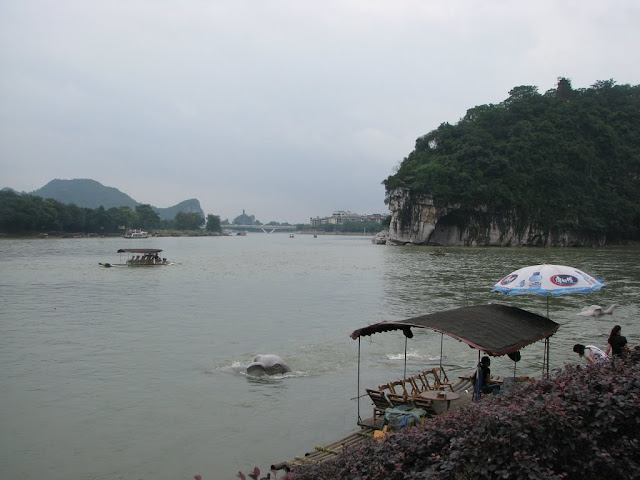 Known for its water and natural green scenery, Guilin is one of the most popular tourist destinations in China with mixed ethnic cultures: the majority is the Miao people. Guilin is part of the Guangxi Zhuang province with the Li River separating the city into western and eastern banks as it travels north to south. Bridges connect these two regions. The general mood in Guilin is tranquil and relaxed compared to that of the stuffy, modern cities of Beijing, Shanghai, and Xi’an. When we visited Guilin near the end of June, the weather was very hot and humid with overcast skies that changed unpredictably; cloudy in the morning and sometimes with a bit of sun peeking into the afternoon. Note: In June and July, bring umbrellas and rain gear. The most popular time to visit is from April to October, but the scenery is beautiful all-year round, according to China Highlights.

Our first stop was the Elephant Trunk Hill, a beautiful rocky hill located on the western bank of the Li River and the junction of the Li River with the Peach Blossom River. Before us, the 3.6 million-old rocky elephant dips its trunk into the water amidst elephant sculptures that playfully blow water at one another. At the top of the hill, the Pagoda for Puxian and Yunfeng Temple built from the Ming Dynasty stand guard. The Water Moon Cave is found between the trunk and the legs of the elephant. In moonlight, a full moon can be seen in the river water’s reflection of the cave. Here there are many inscriptions that praise Guilin’s natural beauty from the Tang and Song dynasties carved into the cave walls. 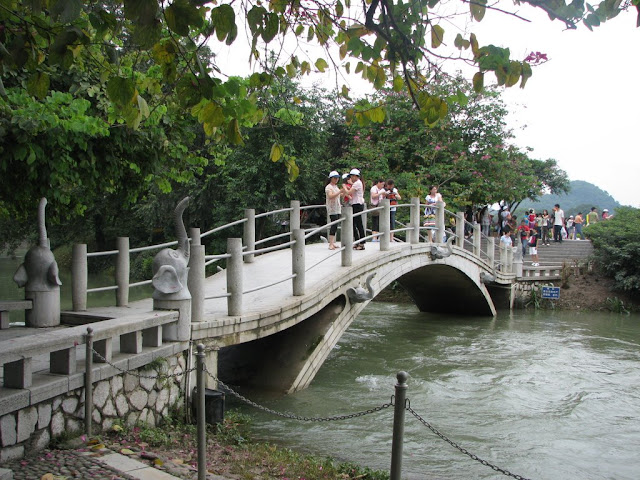 Further into the park, a bridge decorated with elephant heads and tusks leads to a more peaceful area away from the touristy riverbank. This spacious area is where the local elderly gather to play Chinese checkers or chess on the public stone tables and stools and take their daily walks. Some modern, artsy sculptures line the lazily curved paths along the riverside. The park is a wonderful place to walk, considering how our particular hotel, Guilin Lijiang Waterfall Hotel, was a short walk away.

Guilin’s commercial center is still developing, seeing how there was highway construction occurring when we were picked up from the airport and being driven to the city; both men AND women were raking gravel into even layers that would later have tar poured on top. It appears that they are anticipating economical needs. The economy in Guilin is highly dependent on tourism, but now, there is light industry. The manufacturing center of electric mopeds (or electric bikes, as the Chinese call it) in China is located here in Guilin. This is a high demand commodity in almost all major cities we visited in China on this trip.

The food we had was done in Guilin style of cooking, which, personally, I believe has similar flavors and vegetable variety as the Cantonese cuisine; these tastes suited us better than the food we tried in northern China (Xi’an was by far the worst due to buffet lunches and dinners). Since the land is quite fertile in Guangxi Zhuang province and the city is only an hour away from Hong Kong by air, vegetables such as bok choy are either imported or grown in the surrounding regions. The Guilin specialty is the handmade Guilin rice noodles (mifen). They are very delicious fried or in soup. 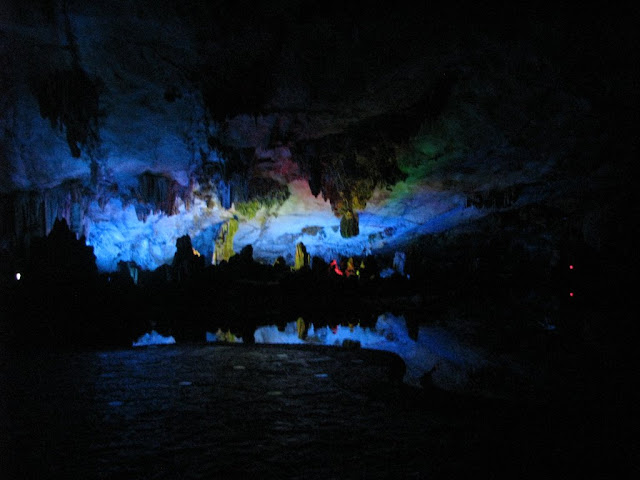 We visited Reed Flute Cave in the afternoon. Historically, this place served as an air-raid shelter during wartimes and is named as the “Huge Art Palace of Nature.” Inside the cool but comfortable cave (a change from the humidity!), there are limestone stalagmites, stalactites, pillars, and imaginary shapes that are given life when colorful lights illuminate them. Many poetic names are given to these formations. Some examples are “A Centipede Frightened By A Magic Mirror” and “Dragon Pagoda.” You also have the opportunity of watching a light show and music when you reach the middle of the cave. It truly feels as if you wandered into a performance inside a fine palace! 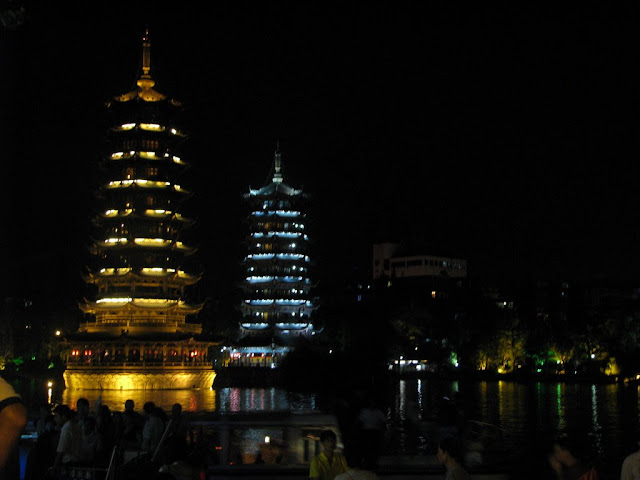 That evening after supper we were able to take a night cruise on the Two Rivers and Four Lakes (Liang Jiang Si Hu): Li River, Peach Blossom River, and its interconnected lakes: Banyan Lake, Wooden Dragon Lake, Osmanthus (Gui Hu) Lake, and Chinese Fir (Sha Hu) Lake. We were able to see the beautiful neon lights of the tall, modern buildings and bridges in the city as well as experience the night life: musicians play traditional Chinese music, people drink tea, and act out in Chinese plays. A most stunning sight of all was the Sun and Moon Pagodas (Twin Pagodas). Located in the middle of Sha Hu Lake, the heavenly golden and silvery lights illuminate from the pagodas likening them to dancing nymphs upon the water. The Chinese know this cruise is a must-see for tourists. As a form of touristy entertainment, they have a musician in the boat playing the erhu and outside a fisherman on a bamboo raft with his cormorant bird fishing. 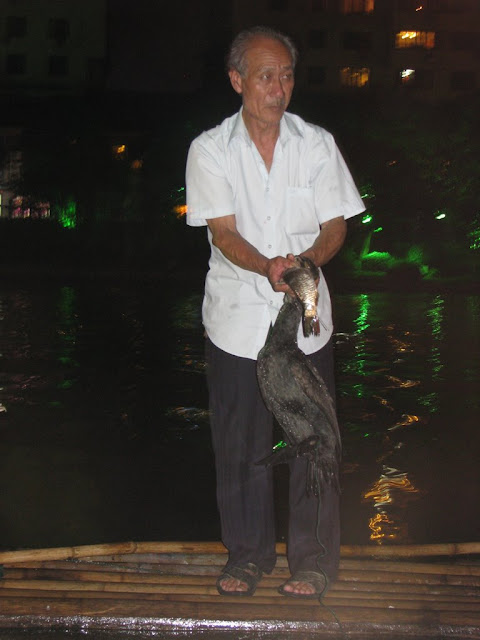 This cormorant fishing technique is a traditional method: a snare is tied around the bird’s throat so that the bird will not swallow a large fish when it catches one, only the small ones. Then, the fisherman gets the bird to spit the fish back out. Once the boat glided past the sights along the riverbank, we returned to the hotel for the night.