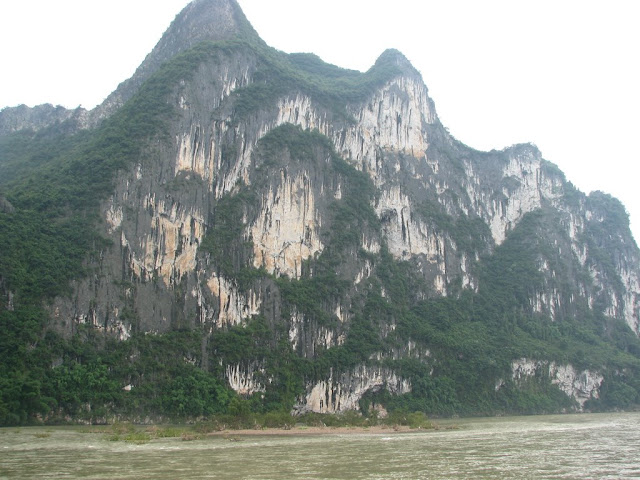 The Painted Hill of Nine Horses on the Li River 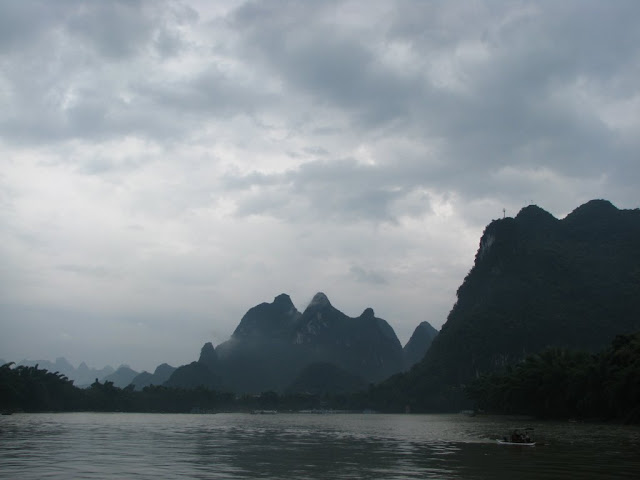 The last leg of the two-day tour in Guilin was the long-anticipated three-and-a-half hour cruise along the Li River (Lijiang). While the river originates from Cat Mountain in Xing’an County of northern Guilin, the cruise begins at Mopan Hill wharf early in the morning. The day was overcast with a chance of rain but comfortable; we brought the complimentary hotel umbrellas just in case. We had the good fortune of having our seats on the second deck and a whole 6-person table to ourselves, while our eight neighbors packed noisily into the other table. Once the boat set sail, a refreshing breeze accompanied us, making the trip comfortable.

The sights and sounds of true Guilin scenery are experienced on this cruise. You can see some wildlife: Cormorant birds, white and brown ducks; and water buffalo. Undoubtedly, seeing is believing—a revelation dawns that the traditional water and mountain paintings are very real, not figments of the artists’ imagination. Han Yu once said, “The river winds like a blue silk ribbon, while the hills erect like green jade hairpins.”

Yet, despite all the hype, I could not help feeling a little disappointed; I half-expected to see more powerful waterfalls flowing through the rocky, green hills than the tiny streams that dripped from the underbrush. 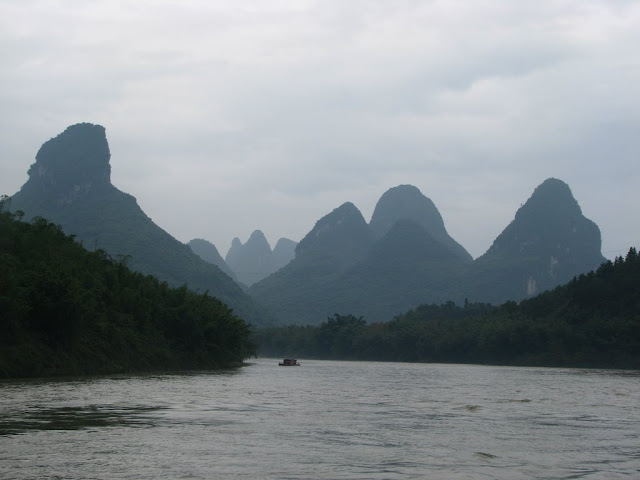 Lunch was served promptly at noon. We were given the opportunity to try some local seafood specialties: Deep-fried fish and spicy black-bean snails each for an extra price of 80-100 RMB. The standard fare included dried bean curd, seaweed soup, beef and vegetables; stir-fried fish fillets with vegetables, sausage slices with vegetables, fried chicken, white rice, and Chinese beer. Not excellent because the food was salty. The seafood was infinitely better, because it was fresh off the boat (Literally, fishermen came up to the boat to deliver the fishy goods) and fried in a kitchen on the lowest deck at the back of the ship. Of course, there were other fishermen hard selling fake jade Buddha figures and pixiu figures on their bamboo rafts.

The cruise ended with the remaining sights (as shown on left) and ended at a Yangshuo County town. Following the same tourist strategy, locals gathered around the disembarking tourists and tried to sell their wares as we made our way funeral procession-like into bamboo construction frame that covered the walkway into the town. Here the rain poured down heavily that our tour guide took us to her friend’s café, where we were able to refresh and relax for awhile with mango and green tea smoothies, until the rain stopped. Then, it was back on the road to Guilin city.

In the evening, we ate at a touristy place behind our hotel. This place ripped us off an extra dish because our tour guide left early. Even so, the food was mediocre and typical tourist fare: oily and contained msg.

This was our last day in Guilin and last day of our guided tour in China. Our flight was scheduled for 6:00PM, so we had a half-a-day to ourselves. We had lunch at the Lijiang River Hall restaurant in the hotel and tried the authentic Guilin cuisine offered, such as the eggplant-wrapped Chinese mushrooms, spicy pickled tripe, and potato-nest marinated pork ribs. The food was spicy but tasty and recommended.

Then it came time to head to the airport at 2:30PM. Everything seemed to go according to plan, until our plane from Hong Kong Airlines was delayed for 5-6 hours due to a mechanical error. The problem with small cities is that there are few direct flights; in Guilin, the two flights to Hong Kong were within an hour-and-a-half of one another (i.e. at 5:20PM and 6:00PM). Secondly, Hong Kong airlines is a new airline company and is liable to error. Thirdly, there were no other alternatives. However, you still have to credit the airlines for giving us a snack and dinner before we flew at 11PM and flying within an hour to our destination. Technically, the flight was supposed to be two hours long, flying leisurely to conserve fuel.

We finally arrived in Hong Kong close to 1AM and missed our hotel’s shuttle. Taking a taxi, we arrived at Langham Place, our hotel, but there were problems checking in. Our rooms were supposed to be next door and on the same floor, but to our frustration, the hotel did not reserve the rooms properly. We had booked back in April and mentioned in our reservation that we needed “two connecting rooms,” a detail that the hotel staff overlooked. A compromise was made; a three-bed family room and a standard king bedroom on the same floor. We, the grumpy, tired, and stinky tourists, finally made it to their beds and thought of nothing else until the next morning.

The shopping in Guilin is reasonably cheap. The weather was poor—we wished that we had a bit more sun that would have made the scenery more enjoyable. We wished we had more time to survey the city; there were some places on the tour map that we did not visit. For example, the Sun and Moon Pagodas actually are tea houses. We neither had the chance to taste the tea nor try the local dim sum. Ah well, maybe another time!

Little-Stuff.com. (2010, January 3). Cruise Down the Li River from Guilin to Yangshuo. Retrieved from http://www.little-stuff.com/China2009/0401a.html