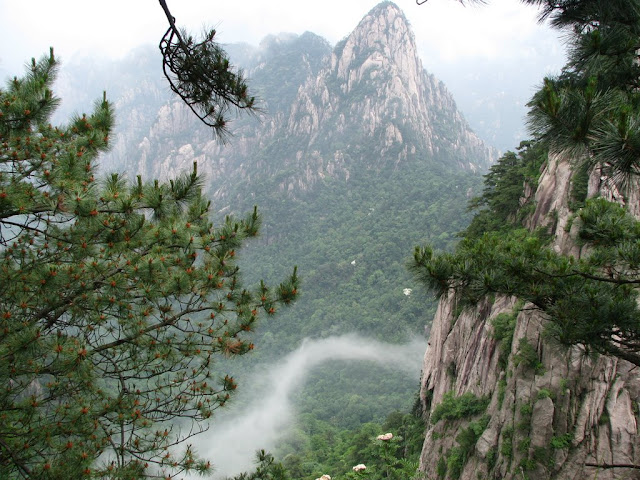 Huangshan (meaning Yellow Mountain) is one of the many must-see sights in China. Its landscape is the most famous for its unique rocky formations. In fact, the landscapes of the Hallelujah Mountains in James Cameron’s blockbuster hit, Avatar, were said to be inspired by the mountainous scenery of Huangshan, Anhui province and Zhangjiajie, Hunan province (via Avatar Movie Blog). Traditionally, the literati regarded rocks and mountains as containing spiritual properties (i.e. balance of the universe), representing famous peaks, and representing the grandeur of nature (via The Art of Asia). 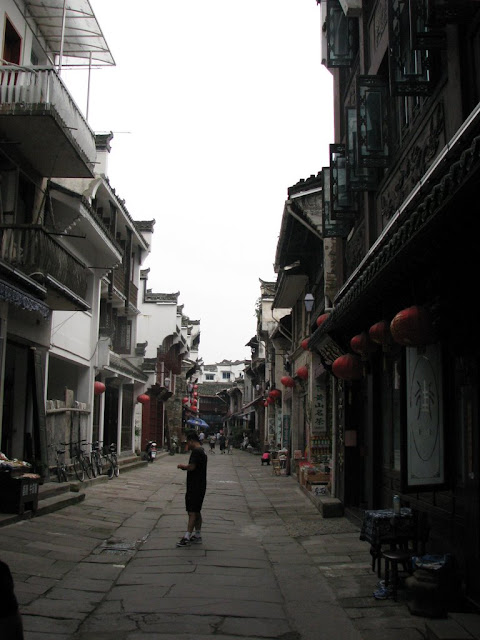 We flew into Huangshan from Shanghai in the afternoon—the sky was hazy and humid. The airport consisted of a single terminal with only a few docking areas for incoming and outgoing flights. Clearly, Huangshan airport goes to a few, select destinations, such as Shanghai, where most connecting flights are available to other parts of China. Our tour guide, Mr. William Hu, met us at the airport and had the driver take us to our hotel. Huangshan city is a tourist city that is rapidly developing; there was ongoing construction of condominiums and commercial centers that can be seen interspersed with the old farming houses and rice fields. 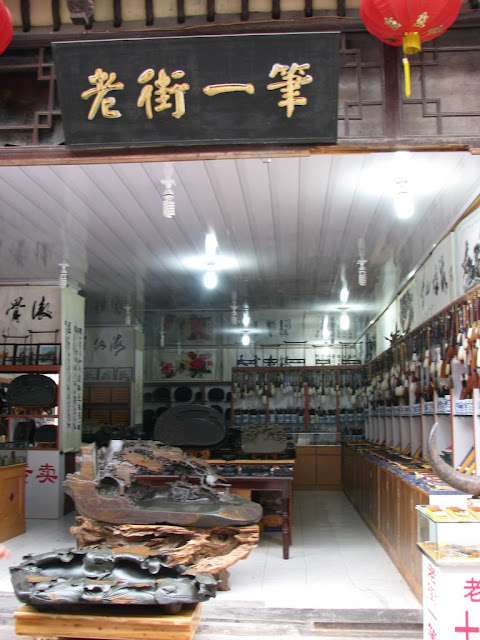 One of the many shops selling inkstones in Tunxi Ancient Street

Our hotel, Huangshan International Hotel, was located in the Tunxi district nearby the Tunxi (Old Town) Ancient Street built in the Song Dynasty (960-1279). Tunxi Ancient Street, while is a tourist area, it represents the mercantile culture of the Anhui people. This cobble-stoned street is filled with shops selling items specific to the Anhui and Chinese culture: ink stones, horse-hair scholar brushes, ink paintings, rosewood carvings, bamboo carvings, tea leaves, and—surprisingly, wooden Russian toys. The ancient Anhui prided themselves on their sense of business and cultural arts. The Peking Opera (or Beijing Opera) originated from the local Huizhou Opera.

On our first night in Huangshan, we tried Anhui cuisine at a restaurant called the Old Street Hotel just outside the Tunxi Ancient Street. Some of the delectable dishes were whole chicken in soup, fried chicken in chrysanthemum flower sauce, steamed local fish, and preserved vegetables noodle soup. Anhui cuisine is noted for their fragrance and taste; and excellence in stewing, braising, and food requiring certain temperature. The portions are reasonable for their price. The food is delicious and contains no msg, which means that this restaurant produces high quality food. 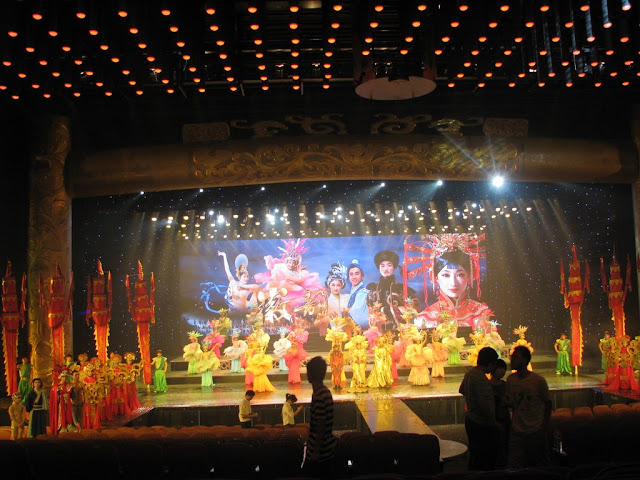 Chorus of the Anhui Show

Following our supper, we went to see a culture show, Chorus of the Anhui. The show consisted of four acts that illustrates the Anhui people’s history and culture: (1) the story of the son leaving home, (2) the lonely mothers waiting for their sons, who return as grown men when they reunite, (3) their performing arts, and (4) the love story between cattle herder and the daughter of the Emperor of Heaven, who were reunited on a single night over a bridge of magpies. The show was fairly entertaining—full of energetic, young actors in bright costumes. The upsides were that the subtitles in both Korean and English for the tourists and a 20% discount courtesy of our local guide.

During our stay at the Huangshan International Hotel, we found the rooms fairly clean but the hallways in the hotel reeked of smoke. For us, North Americans, this was unbearable; we felt smoking guests should have their own floor. Unfortunately in China, while there are smoking and non-smoking floors and rules against smoking within public buildings, the locals do not obey the rules and smoke anywhere for their own convenience.

The next day we headed up to Huangshan, where we stayed overnight with backpacks filled with a change of clothes, pajamas, and toiletries. The drive to the funicular station, Yungu Station, at the foot of Huangshan Mountain is more than 40 minutes long past farms and into the groves of bamboo growing along the mountainside. We started our hike at White Goose Ridge Station toward the Xihai Hotel. Some of the sights we saw were Black Tiger Pine, The Flower Grown Out of a Writing Brush Rock, Begin to Believe Peak, Grand Canyon of the West Sea, Flying Over Rock, and Cloud-Dispelling Pavilion. 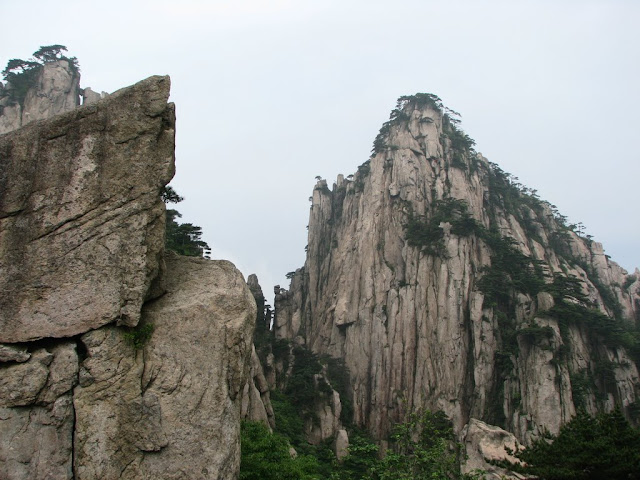 There are few words that describe the unique landscapes of Huangshan: mystical, inspiring, and evanescent. There are stubby tree shrubs that grow persistently from the rocks of Huangshan; these rocks must be very porous and full of minerals to allow vegetation to grow extensively. June is the rainy season; from the photos, there is always haze and mist that hide the mountainous sights, giving them mystery and depth. It would be worthwhile to visit again during a different season to see how the seasons affect the sight of the mountains. Supposedly, there are monkeys that live in these mountains, but it’s a pity that they didn’t show up when we were there.

The Xihai hotel facilities are minimal. Although down jackets and heavy blankets are supplied, there is no air condition, only a heater because up in the mountains, the temperature drops rapidly making it very cool. The coolness during the summer actually made the hike bearable, to our surprise; we were lucky not to catch colds due to the contradictory weather and indoor temperatures. 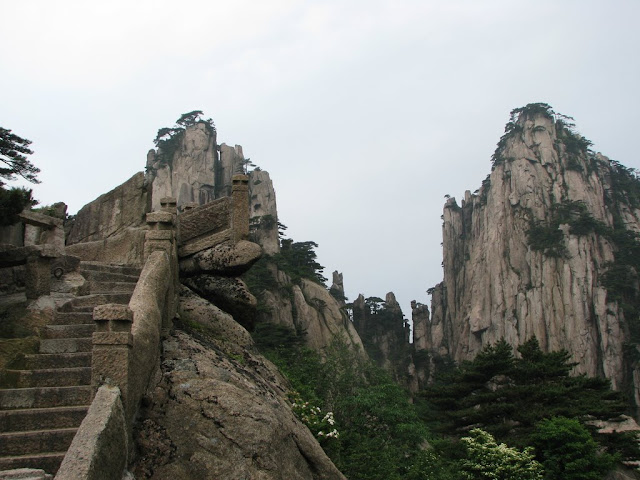 The Winding Stairs Up the Mountainous Huangshan

A note on the economy of Huangshan: Porters from the cities at the food of Huangshan Mountain carry all the goods required by those living on the mountain on their backs using bamboo poles. It’s a 3 to 4-hour hike alone up the path taken by the funiculars and another hour or three to go to the hotels, where they deliver the goods. Then, it’s back down the mountain for them. Poor farmers take these porter jobs because they feel that they can have a constant wage, instead of relying on good weather and crop yields. I feel sorry for them.

Note: If you see these porters, do not take photos because it’s not allowed, according to the local government.