Visited June 11-13, and 25. Madrid is located at the heart of the Iberian Peninsula. 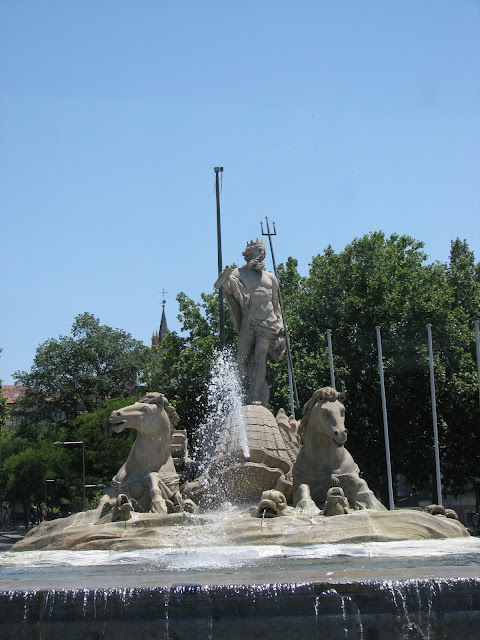 Madrid, the capital of Spain, is located in the heart of the Iberian Peninsula along the Manzanares River, which is spanned by several historical bridges. Throughout Spanish history, Madrid’s identity has evolved with the influential periods of time, ranging from the Bourbon royals to the artistic vision of famous artists, such as Francisco Goya and Diego Velazquez.

We chose to visit Spain during the early summer: it was about 23-27ºC/73-81ºF, which was not so hot as in July and August. The weather was sunny and pleasant without being overbearing. 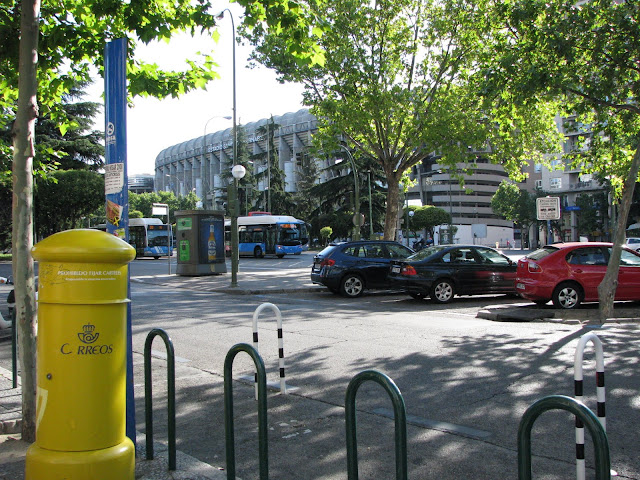 We arrived in Madrid on June 11, one day before the start of our tour. We spent the day adjusting to the surroundings. Our hotel—Holiday Inn Madrid— was located nearby El Estadio Santiago Bernabéu, the home of the Real Madrid soccer team, and nearby a few shopping malls and convenience stores. Our location is also conveniently nearby a metro station, which we planned to use the following day to see the major attractions that were not included in our tour itinerary: El Palacio Real and its surroundings. 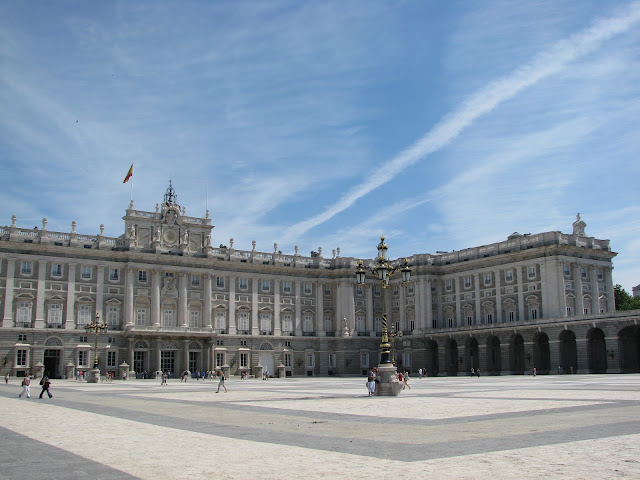 The following morning at 7AM we had a hearty breakfast of croissants, hot chocolate, and coffee at a local café. Then, we headed to the metro station and purchased one-day tourist tickets (abonos turísticas) for 6€ each. The metro took us to our stop at la Plaza España, from which we walked to El Palacio Real (Royal Palace). Tickets cost 16€ each for admission into the palace and to the royal art exhibition on Poland and other European works (on display from June 1 to September 4, 2011). 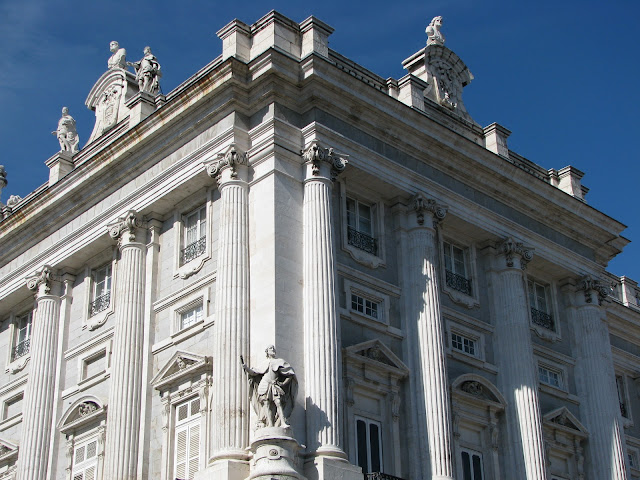 The façade of the palace is reminiscent of the classical style popular in many European palaces, such as the Palace of Versailles in France. Inside the palace, the rooms varied in size and types of furnishings and decorations. Some rooms were clearly influenced by the French royalty: a room with mirrors, called the king’s antechamber, was similar to the Hall of Mirrors in Versailles. Other rooms carried full-sized portraits of the royal inhabitants and designers of the rooms. It was a surprise to see some oriental influence in a room with bright Spanish colored tiles of Asian symbols and jade carvings of humans in the Asian style.

After touring the palace, we had the opportunity to see the royal art exhibition on works from Poland, Russia, the Netherlands, and other European countries. Of the artists presented, the most famous work is the Lady with an Ermine by Renaissance artist, Leonardo da Vinci.

After an overview of the Royal Armory that showcased the royal armor and weapon collection, we had lunch at the Café Vergara, where we tried the daily menu of a starter, a main dish, bread, drink, and dessert. I ordered a gazpacho (a cold tomato soup garnished with oil and spices), brocheta de pollo (chicken kebabs), and tart.

Tip: Trying the daily menu is a way to taste the Spanish cuisine and is more reasonable than ordering separate dishes 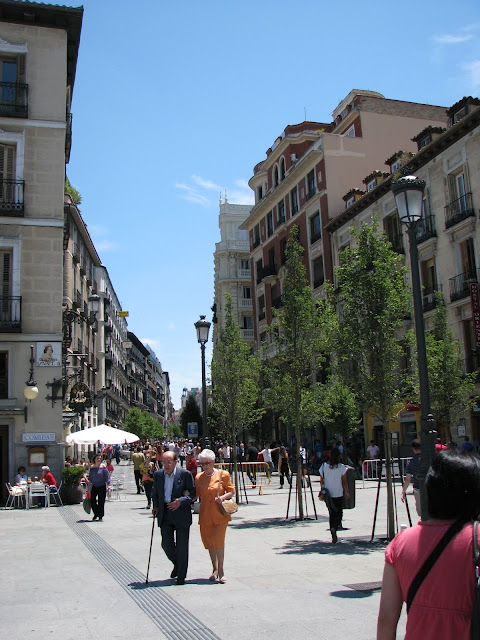 Next, we walked down to La Puerta del Sol, looking around at the numerous tents of protestors and shops.

Once again we took the metro to La Plaza de Colón (Plaza of Christopher Columbus) to find the Hard Rock Café, because my father collects t-shirts. The weather was quite hot, so we stopped at a Häagen-Dazs for ice cream smoothies and iced lemonade before returning to the hotel to meet our tour director, Jorge Coelho, and travel companions. 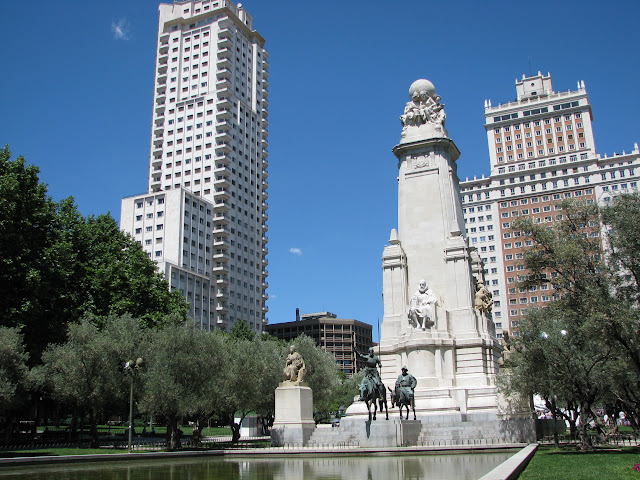 After our day trip to Toledo, a local tour guide showed us the major commercial districts of Madrid along Gran Vía, Paseo Serrano, and Paseo de los Castellanos. Many of the buildings found along these streets vary in architecture style, illustrating the historical periods through which this city has evolved from. At the end of Gran Vía is the Plaza de España, which houses a monument to the famous writer, Miguel de Cervantes. The monument features the bronze sculptures of Don Quixote and Sancho Panza; and stone statues of Aldonza Lorenzo and Dulcinea del Toboso. 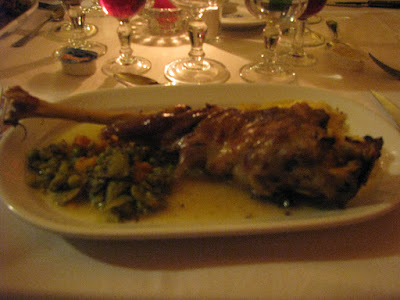 As part of our tour itinerary, we had the opportunity to try Spanish specialties: roasted lamb, suckling pig, fried fish, and paella at a local bar-restaurant called Avelan. I had the roasted lamb, which was tender and flavored with herbs and delicious gravy. After careful reflection, this was, hands down, one of the best meals we had in Spain. For dessert, we had a flaming Alaska to celebrate a travel companion’s birthday. 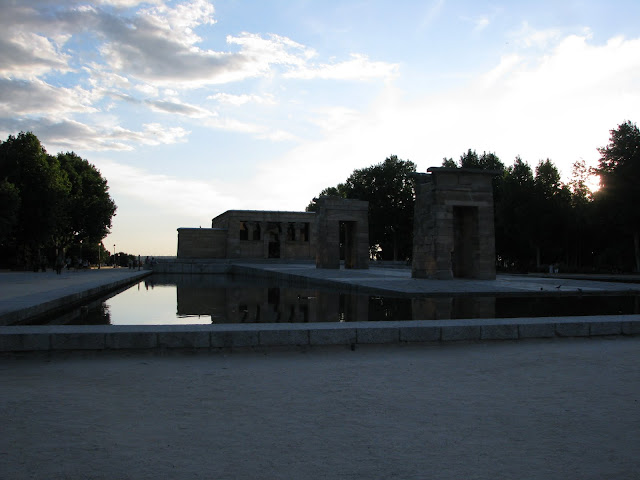 We were able to walk off that filling supper at the park surrounding the Temple of Debod—an Egyptian temple dedicated to the goddess, Isis, rebuilt in Madrid from Aswan, Egypt. 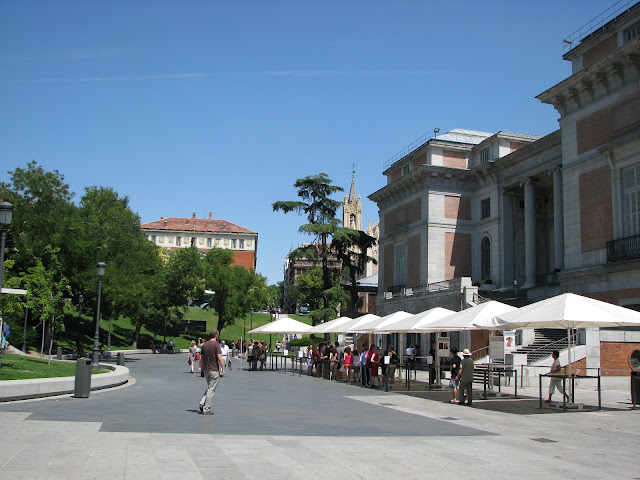 After traipsing through the Cantabria, Basque, La Costa del Sol, Andalusia, and Castile-La Mancha regions of Spain, we returned to the heart of the country—Madrid. On this day, we visited El Museo del Prado. We had a detailed, guided visit by a local guide of the works of many Spanish and well-known masters, including Francisco de Goya, El Greco, Diego Velázquez, Peter Paul Rubens, and Bartolome Esteban Murillo. Our guide gave us a detailed analysis of Velázquez’s masterpiece, Las Meninas: the artist’s intention, the six points of light, the identities of the figures, the space and depth; and detailed brushwork.

With this last look at Madrid, we said our farewells at a last supper with our travel companions and promised to visit at another time. My parents had come to Spain 20 years ago to find many changes in the cityscape, landscape, and environment of the Spanish had taken place when they came in 2011 with us—their children. It would be interesting to see if Spain has changed and what new adventures await us when I return with my own children.

We missed out on important attractions that were not covered during our free time and in our tour. These places included La Plaza Mayor and Museo Reina Sofía (which houses Pablo Picasso’s Guernica).