Visited June 16-17, 2011. Barcelona is located in the Catalonia region of Spain.

Barcelona’s origins are unclear, but it has enjoyed a rich 2,000 years of history. Under Roman rule, it was known as the city of Barcino, and then it passed into the hands of the Christians, Visigoths, Jewish, Muslims, and Counts of Barcelona. With the marriage of Ramon Berenguer IV, Count of Barcelona; and Petronila of Aragon in 1137, Barcelona passed into hands of the Aragón monarchy. It was not until the marriage of Ferdinand II of Aragón and Isabella I of Castile in 1469 that united both kingdoms and created what would be modern Spain.

Barcelona, located in Catalonia, is renowned for its craftsmanship, creative arts, textiles, and other industries. The Catalan people speak both Catalan and Spanish. During our stay in Barcelona, a major cosmopolitan, we stayed at the Hotel Catalonia in the Plaça d’Espanya—a major plaza that includes the buildings used in world-wide exhibitions and is located nearby the Olympic Park, where the 1992 Olympic Games were hosted. We stayed in the family suite on the top floor of the hotel, which had a panoramic view of the plaza and nearby stadium-turned-shopping mall.

Upon arrival to Barcelona, we were met by our local tour guide, who took us to El Museo de Picasso (Picasso Museum). The museum contained a survey of Picasso’s work from different periods of his life: his early childhood to his cubist period. The most impressive of the collection were his early works, specifically his drawings. I was a bit disappointed that the museum did not contain any of his famous works, for they were located in different museums around the world. The gift shop did contain prints of the famous works that can be bought for semi-reasonable prices.

We were given free time for the rest of the evening. The tour bus dropped us off at the Plaça del Portal de la Pau and Plaça de Colom in front of the Columbus Monument. We took the opportunity to stroll along La Rambla—a famous, touristy, pedestrian street lined with trees, shops, and restaurants— located north of the monument. Also called Las Ramblas this street branches off into several side streets to more authentic experiences of Barcelona. One such experience is the local market called La Boquería. The sights of colorful fruits and legumes assault the eye; and the sounds of the locals bantering for lower prices are music to the ears in this lively place. Eager to try the fresh oranges of Spain, we searched for the best possible deal. Prices are not listed. One must ask “¿Cuántos cuestan las naranjas?” to find out the price. As per my mother’s keen eye for quality and deals, we finally settled on a stall held by a quiet gentleman, who assented our request for four oranges and sold it for, I believe, 3€ per kilo! It was quite expensive, but for the sake of traveling and experience, money is a small price for enjoyment. That evening we had supper in a restaurant along La Rambla nearby the Hard Rock Café. We tried the paella—a well-known Spanish dish of white rich colored by saffron and seasoning; beans, green vegetables, and meat. The two types we tried were the mixed paella with beef and seafood; and the seafood paella. Although this was not the Valencian style, it was reasonable and surprisingly good albeit the seafood one was a bit salty due to the salt they used to preserve the seafood was not washed off.

The following morning we awoke to a busy itinerary. First, we visited the Barri Gòtic (Gothic Quarter) in the Cituat Vella—the old town of Barcelona. It was as if we walked into living history; the gothic-style buildings rose around us in their majesty, casting unique shadows on the ground. The buildings were preserved—the carven figures were not crumbling and for the most part intact but the walls of the building could have been kept cleaner. Our local tour guide took us to La Església Catedral de la Santa Creu (Cathedral of the Holy Cross), where we explored a richly decorated interior inlaid with gold, reliquaries, and places where one can light a candle to their saints. We paid our respects and quietly left the sanctuary of peace.

Next, we winded our way through residential neighborhoods that were built in the Modernisme (Modernismo catalán or Modernism) style. According to our guide, these architectural designs were by the famous Antoni Gaudí (1852-1926), whose designs are found throughout the city. Barcelona was at the forefront of this Modernisme movement not only in architecture but poetry, sculpture, theater, and painting, especially by artists, Pablo Picasso and Joan Miró. 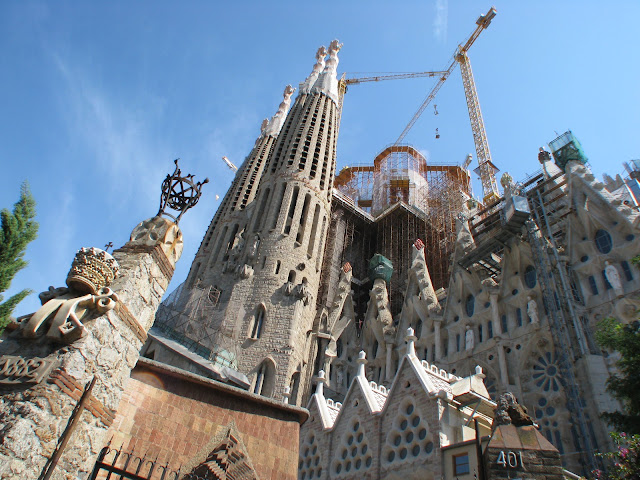 We continued our tour of Gaudí’s works with a brief visit to La Sagrada Família. I was amazed by the elaborate and detailed Gothic-like façade of the basilica that depicted the Birth of Christ. The other façades depicting the Passion and Death of Christ were not finished by Gaudí who began on the project on 1883 until he passed away in 1926 by a tragic tram accident. It was completed by sculptor, Josep Maria Subirachs, in 2002 in his distinct naturalistic style. Despite the controversy surrounding the completion of the basilica façades by another artist, Subirachs’ style highlights the starkness and tragedy of Christ; and the mourning by the figures with the use of angular shapes and lines. We were not able to visit the interior of the basilica, because it was currently renovating. Once renovation is complete there will be 18 towers: 12 of them would be dedicated to the apostles, four to the evangelists, one to Jesus, and the last to Mary (via the basilica’s website). That would be a sight to see! 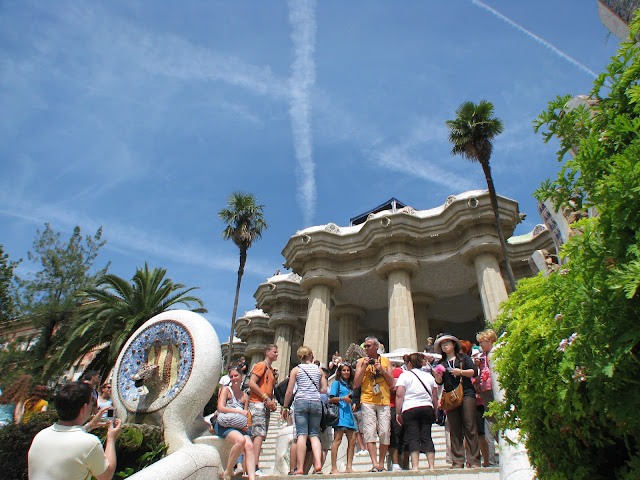 Next, we visited the last work by Gaudí on our tour: Güell Park (1900-1914) located on Mount Carmel. His patron, Eusebi Güell, commissioned the artist to design an English-style garden city with 60 one-family houses. However, the project was not completed; only two of the houses were completed with Gaudí living in one of them for a while from 1906 to 1926. 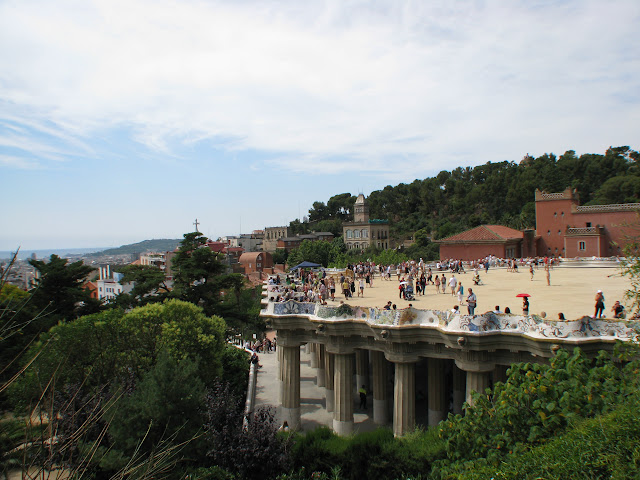 The park is considered a harmony of nature and the man-made. For example, the use of organic shapes to make up the undulating bench covered in a mosaic of glazed ceramic tiles and curving stairway complement the tree-like columns supporting the pedestrian walkways and cave-like structure below. The major picturesque sight is the main staircase with the glazed ceramic dragon before a dome-like structure supported by Doric columns. Strolling through the park was like wandering through a dream. 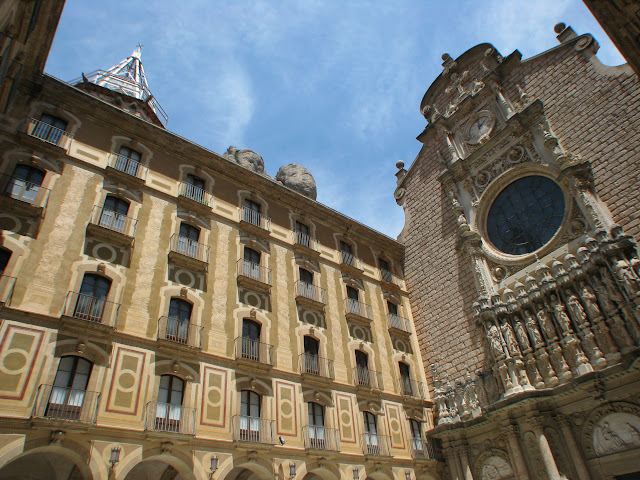 After saying our goodbyes to the friendly Gaudí, those who were going on a day trip were herded into the tour bus and on our way through the winding greenery of the Catalan Pre-Coastal Range to the Benedictine monastery, the Santa Maria de Montserrat. Legend has it that the statue of the Madonna was once lighter in color but after several offerings of candles by pilgrims, the statue became tanned by the smoke from the candles and humidity over the centuries, becoming the Black Madonna, also known as Our Lady of Montserrat (“La Moreneta” meaning “tanned”). The original monastery was destroyed in 1811 by the French, and the community was rebuilt in the 1850s in the neo-Romanesque style from the Romance period of the late 19th century. The monastery is dedicated to both Saint George and La Moreneta. 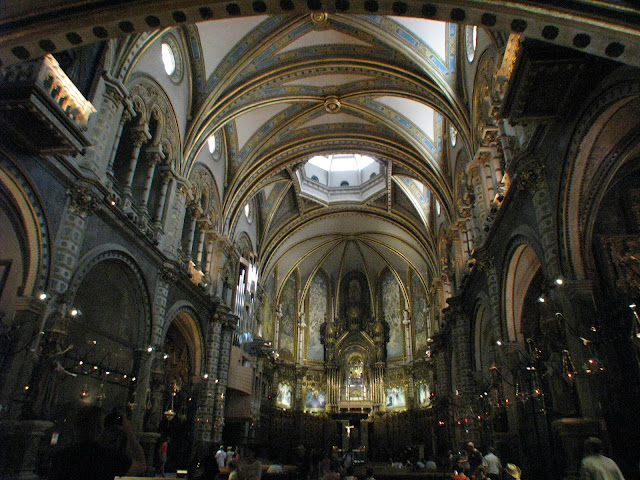 Our free time consisted of exploring the interior of the monastery and eating a quick lunch. The interior consisted of a domed ceiling intersected by a series of rib-like arches that guided one’s eye toward the main altar surrounded by religious murals. Just above the main altar is a balcony, where one can touch the orb held by the Black Madonna. Sadly, since we were pressed for time, we were unable to get a closer look. Lunch was a mixture of cafeteria food: pasta, smoked ham sandwiches, and overcooked chicken breast. We then half-ran to the rest area and back to the tour bus.

Our arrival back to Barcelona was in the near evening. With our free time, we took a taxi (about 5-8 € in the city) to a coin laundry (la lavandería autoservicio) called Bugamatic to wash our laundry. After the chore was done, we joined our group for an evening panoramic view of the city at Montjuïc—a summit within the city that has a cable car, which can take one to the foot of Montjuïc Castle. The surrounding park is nearby the Olympic Stadium, where the 1992 games took place. The bus dropped us off at the Plaça del Mirador nearby the Sardana, the monument of people with linked hands in a Catalan dance. We walked to the Mirador de l’Alcalde that overlooked the Olympic Port, where cruise ships and ships with goods were harbored. 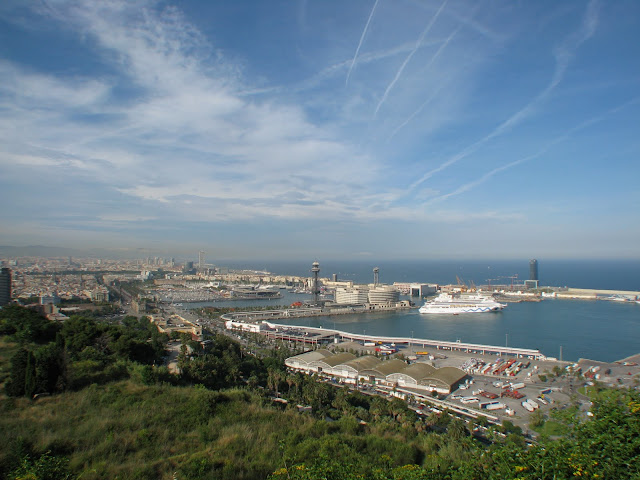 Finally, the bus took us to the Olympic Port for an optional dinner. Those of us who went enjoyed musical entertainment by a talented accordion player, who showed his mastery of several foreign tunes, and a scrumptious supper of an appetizer, fish, steak, salad, and crème brûlée or lemon ice. It was reasonable but not truly authentic cuisine. In the eve of the setting sun, we headed for the hotel weary but content with the sights we experienced today.

Spending two days in Barcelona is not enough to explore every corner of the city. I purchased a touristy guide on the city and its important sites from the Escudo de Oro published in 2003, for memory’s sake. We certainly would like to return to Barcelona and hopefully see the completion of La Sagrada Família and be able to visit the interior. It would also be nice to try more of the Catalan cuisine.