The region of Andalucía was invaded by the Moors in 711. The name was derived from the old name, al-Andalus, after a group of Vandals– a barbarian tribe– that conquered the Strait of Gibraltar into North Africa. Today, it is a prosperous region known for its unique culture, artisan crafts, and cuisine: gazpacho (cold tomato soup in vinegar), jamones (ham), pescasito frito (fried fish), and sherry.

Visited on June 19, 2011. Located in the Granada Province of Andalucía.

From the Comunidad Valencia, we embarked on the longest road trip through the region of Andalucía. Our tour stopped briefly at a nearby rest area’s cafeteria for lunch: sandwiches, soups, and drinks. Then, we were taken to the villages of Purullena and Guadix located in the northern Sierra Nevada and known for their artisan crafts (e.g. the blue-white glazed potteries and dishes) and white-washed cave dwellings built into the rocky terrain. Named as the “Barrio Troglodyte” (Troglodyte Neighborhood), cave dwellings have been used since the Moorish days to escape from the intense heat of summer. Like any Spanish home, the dwellings are outfitted with bedrooms, kitchens, living spaces complete with electricity, internet, and television; and lined with marble floors. We were lucky to be invited into one of these homes to take a look around. The ceilings of the home are a little low but the interior is spacious and quite comfortable especially since it was about 38 degrees Celsius when we arrived. According to our guide, these cave dwellings can be rented today as apartments for visitors. After a brief tour of the home, we returned to the bus towards Granada.

Unfortunately due to the limited amount of time we had, we were not able to explore the other famous landmarks in the towns. In Guadix, there is the Cathedral of Guadix that is built in different styles from the Renaissance to the Gothic style. Nearby Guadix, a few miles east lies the Castle of the Calahorra, a Renaissance-style fortress of a Christian knight rewarded for his work in the Reconquista, in the village of La Calahorra. In Purullena, there is the Immaculate Cave Museum that details the history of the caves of the Cerro de la Inmaculada (Immaculate Hill) and a village church built in the 15th century in the Mudéjar style—an architectural style that blending the Moorish and Christian cultures as a result of the Moors who lived in Spain after the Reconquista but were not converted to Christianity. 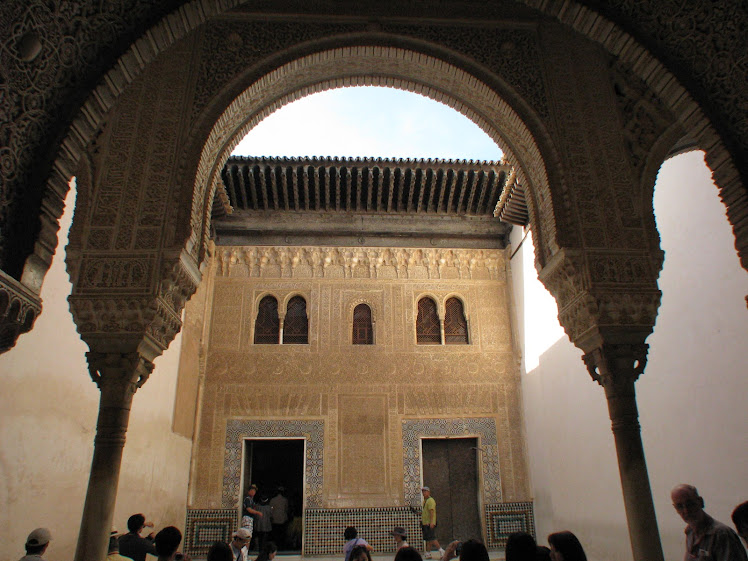 Located in the lush, fertile region of Andalucía, fresh grapes, almonds, pomegranates, and poplar trees are grown commonly in the province of Granada. However, most famously Granada (derived from the Spanish word meaning “pomegranate”) is known for its Moorish monuments with La Alhambra as the crowning achievement. Historically, Granada was considered the “paradise of water” to the Moors, who were given this land. During the Reconquista (unification of Spain), this city was the site of the Battle of Granada—the last battle during which Emir Muhammad XII surrendered control to Ferdinand II and Isabella I of Spain on January 2, 1492. To this day, January 2nd is celebrated as Granada’s independence from the Moors.

Upon our late afternoon arrival into Granada after a 5-hour drive, we were given free time to explore the city. The city is divided into quarters: in the north is Albayzín (or Albaicín, the Moorish quarter); further north is Sacromonte, the gypsy quarter; and the Realejo, the old Jewish quarter now turned Christian and modern quarters. We took a taxi about 5-6 € to the commercial center, la Plaza de Isabel la Católica, located in Realejo. We explored the curious streets nearby into the Alcaicería, where there is a Mercado de Artesania (Artisan Market) with plenty of tourist and artisan stores selling ceramics, clothes, and metal works alongside the pedestrian streets. After finding some unique souvenirs, we wandered over to the Catedral de Granada. Its wide façade of carved arches enshrining religious sculptures and stylized pillars are clearly evident of the Spanish Renaissance style of the early 16th century. Although we were unable to visit, the Chapel of the Trinity within contains paintings by El Greco, Jusepe de Ribera, and Alonso Cano. It is located nearby the Gran Vía street.

After this exciting excursion, we headed towards the Pescadería street, where we found an ice cream parlor and had delicious fruit smoothies and ice cream sundaes to quench our thirsts in the 40 degree Celsius weather. We had an average buffet dinner of the usual meats and vegetables in the hotel. Sadly, there were no opportunities to try the local cuisine.

Early next morning (June 20th), we were ushered with our luggage into the bus to the highlight of our trip: La Alhambra, the “Red Fortress” in Arabic. On the craggy hills of the Sierra Nevada, the Moorish palace and gardens of the La Alhambra rise majestically over the city of Granada in the light of the early morning. We were taken to the main entrance. From the main entrance, we were led by our local guide onto the pathway leading to the gardens of the Generalife.

The Generalife (“Garden of the Architect” from Arabic) is also named as the most “principal and noble of the orchards” according to Christian and Arab writings. The Cypress Walk, a gently winding road heralded by cypresses planted alongside the cobbled stone walkway, led us towards an open area, where one can see the Red Fortress on the other side and an amphitheater nearby. The steps led up to a maze of hedges and fountains—a beautiful picturesque sight—and then into the Water Garden Courtyard within the rustic villa of the royal family.

From the Water Garden Courtyard, we went to the Cypress Courtyard and then up the stairs to the Water Stairway and back down to the Cypress Walk. At the end of the Walk, we arrived at the bridge leading into La Alhambra. We walked along the main path through the Alhambra Forest and past ruins of old walls towards the ornate façade of the Palacio de Carlos V. The surrounding exterior façade of the Palacio is made of stone etched with modernized windows and iron rings shaped as eagles and lions. 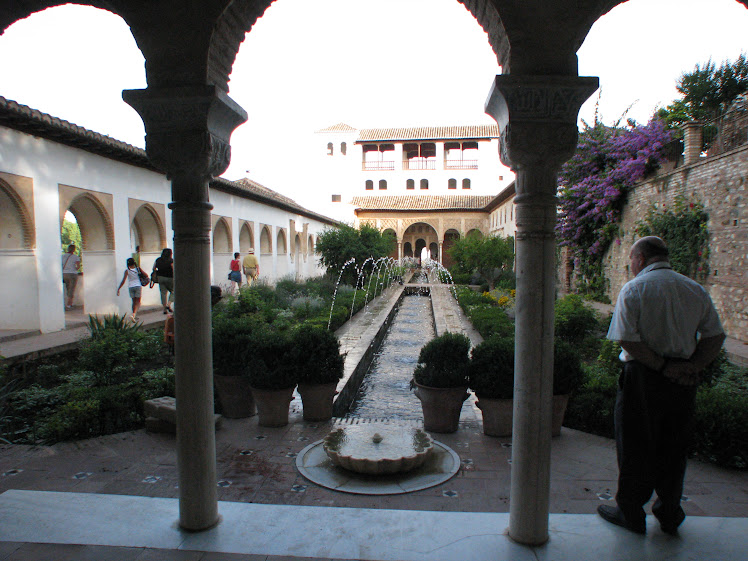 Next we headed to the entrance of La Alhambra. Inside and into the first courtyard, I was simply astounded. The intricate details, colors, smells of the fragrant flowers, and swirling masses of the tourists assaulted my senses simultaneously. The architectural style of the building can be summed as Mudéjar—the blending of the Moorish and Christian styles. The archways were elaborate filled with elaborate and colorful mosaic designs and graced with Arabic calligraphy. The courtyard gardens were spacious accentuated by the pillars and arches; and contained elaborate fountains that were fed by a rectangular pool of water in the center of the courtyard. A second story can be seen from the courtyard lined by balconies built up by tiles. It was very tranquil and picturesque. 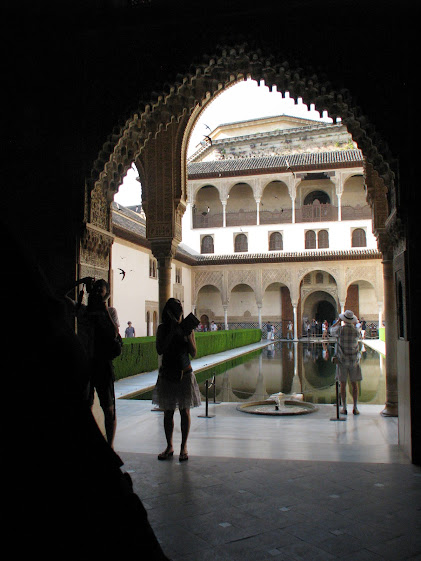 From the shadows, looking at the courtyard in La Alhambra, Granada

Unfortunately, we were not able to see the famous Fountain of the Lions in the Patio de Los Leones, because it was under restoration. This is where the royal family had their private dwellings.

The attraction is open from 8:30AM to 2:00PM with tickets costing 14€ per person. Visiting the palace of La Alhambra is limited to the time printed on the ticket as per the protocol in controlling crowds.

La Alhambra is an incredible gem from history. It is a pity that we were unable to get pictures of the Fountain of the Lions. It would be a pleasure to visit Granada and the Red Fortress in the future to see the end result of the renovation.