After a tough semester, I spent a week (August 3-10, 2013) in Toronto– the city of my birth– to visit relatives and family friends; go sightseeing, and investigate various suburban areas (i.e. Markham and Richmond Hill) to determine the market for pharmacy. In this account, I will highlight some of the important must-see sights of Toronto and their exquisite cuisine.

We left San Francisco and arrived in Toronto on time. The plan was to meet my mother and brother, who would arrive at the airport from Montreal at 8 PM EST, at Payless car rentals. Unfortunately, we had trouble looking for the rental place, so we waited for the rest of our family before going together. After asking the airport staff, we learned that the car rental place was off-site and one had to call the place for a shuttle to go there. Not very convenient as we have liked.

We rented a Hyundai Elantra that was fairly easy to drive. Since we had not returned to Toronto in years, my father had trouble getting onto the highway toward Markham/Unionville. By the time we arrived at the Hilton Suite (formerly Markham Suite Hotel), it was already 10:30PM. We then headed to  Richmond Hill Court restaurant for a quick meal of wonton noodle soup, beef congee, ying yang fried rice, gai lan, and satay vermicelli noodles. We finally went to bed at 2 AM. 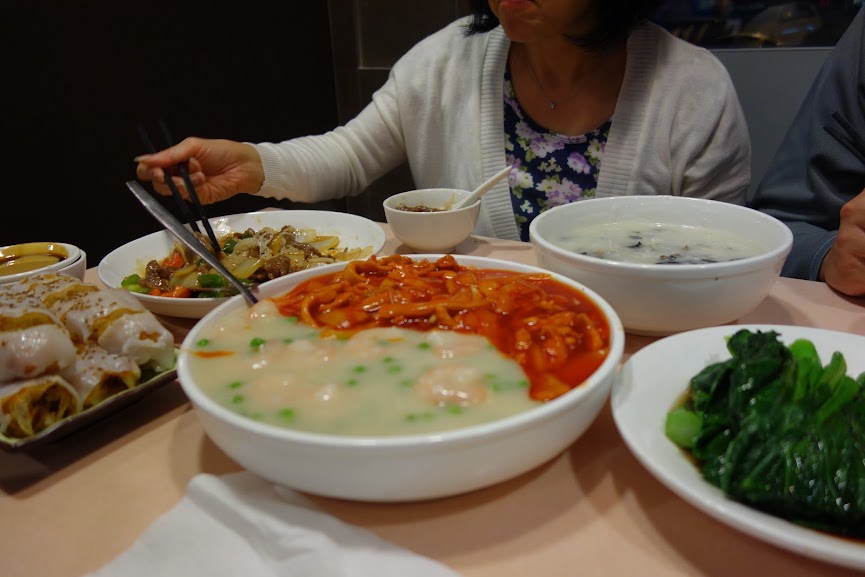 A quick near midnight dinner at Richmond Hill Court

In the drowsy morning, we had breakfast at Congee Wong consisting of dumplings, gai lan, congee, Chinese donut, and breadsticks.  Today, we planned to meet my aunt in downtown Toronto. We drove to Finch Ave, where we parked our car at the park-and-go area and took the subway to College Street. The fare prices were reasonable. We purchased 14 tokens for $36 CAD.

We visited my aunt in her apartment and helped her with a few things before we walked to the Eaton Centre, where we had lunch in the food court (a Thai meal of Mango salad, spring rolls, beef noodle soup, and pad thai). Then, we picked up her television and stopped by Hard Rock Café for souvenirs.

Auditorium at University of Toronto

After helping her set up the television, we walked to University of Toronto and the surrounding governmental buildings. The buildings itself are very historical and well-preserved.

However, the boundaries of the university were hard to distinguish from the rest of the downtown buildings. We passed by the old buildings of surrounding Women’s College, Toronto General Hospital, and Sick Children’s Hospital. Then, we headed to Spadina Avenue to look for a suitable restaurant to have dinner.

We had a hearty dinner at Gourmet BBQ in the old Chinatown located at Spadina and Dundas. We had a dinner special with Peking duck, steamed fish in soy sauce, vegetable (lai tong) soup, XO sauce tenderloin, three season vegetables, and seafood and gai lan. The overall meal cost $61.99 + tax  (about $70 CAD).

Then, we enjoyed an evening walk back to Auntie’s apartment and took the subway back.

Today we went to dim sum with my father’s oldest friend at the Premiere Ballroom restaurant—a classy restaurant with French baroque décor. We tried, in addition to the usual dim sum, pumpkin congee, yam tart with coconut, steamed dumpling with mushrooms and scallops; chow fun, and satay noodles. 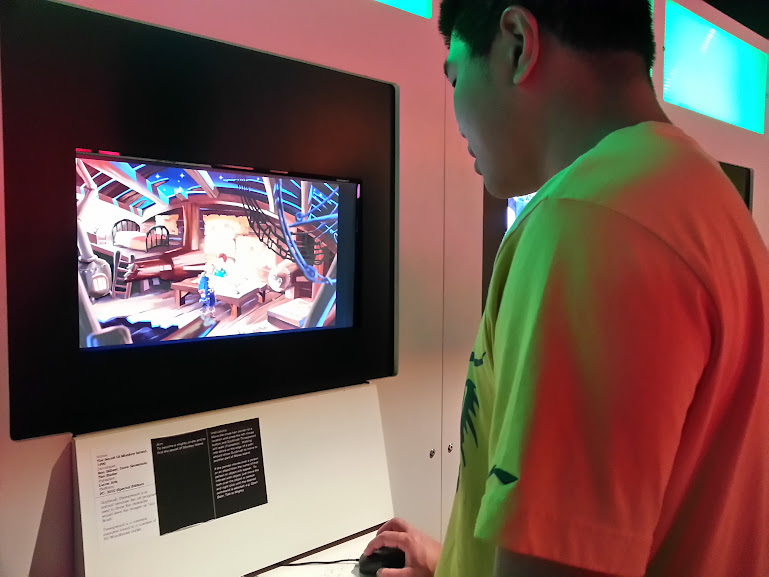 Playing Monkey Island at the Game On 2.0 Exhibit in Ontario Science Centre (2013) 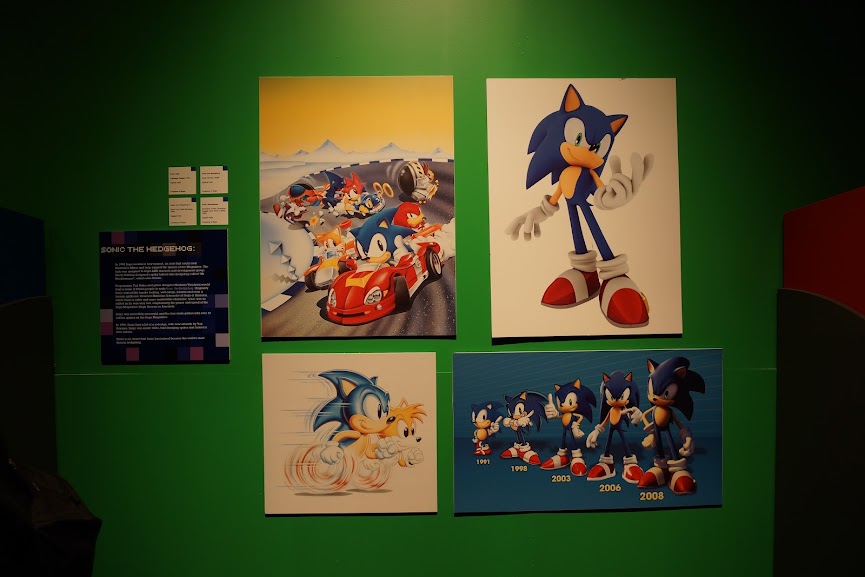 After the early meal, we returned to the hotel to freshen up and then headed to the Ontario Science Centre to see the “Game On,” nature, and space exhibits at 3 PM. It was a bit disappointing since the game exhibit only displayed the various games popular in the U.S. and overseas; and merely allowed us to play the games.

The Centre was busy as various youth groups were visiting and enjoying the various demonstrations there. We chose not to see an IMAX film, although the butterfly film was the most interesting of the bunch. Overall, the visit lasted an hour and a half.

We returned to the hotel to freshen up before heading to the historic village of Unionville – a quaint village of British-style buildings and blooming flowers of multiple colorful shades. It was a nice walk. 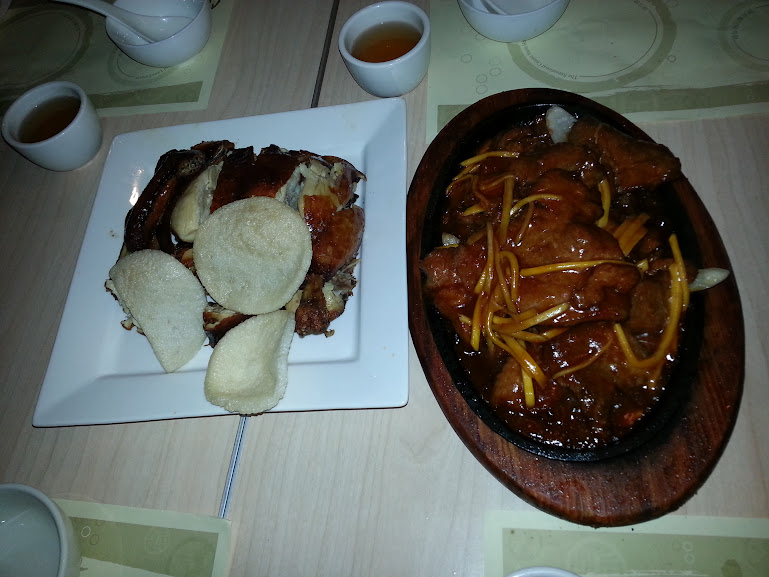 Afterwards, we went for dinner at the Congee Queen. The dishes were reasonably sized for the price. We ordered crispy chicken, lettuce wraps with meat bits, mayonnaise shrimp and mango salad; mushroom and vegetables; and tenderloin beef in mango sauce. It was very good!

We once again visited my aunt in her apartment. After a few hours of computer tutorial and internet set-up, we had a lunch of salad, corn chowder soup, and sandwiches from Panera Bread. Later, we headed to the Royal Ontario Museum to see the special exhibit on Mesopotamia, China, Africa, and other ancient civilizations. One of the highlights of the visit was the interactive displays that brought the Mesopotamian murals to life and made connections to our present life. For example, the Code of Hummarabi was connected with the current laws of the world.

After a brief tour of the Royal Ontario Museum, we went to dinner with our aunt at Red Lobster just located on Bay Avenue. We tried the 4-course meal special consisting of soup, salad, the main entrée, and dessert. It was reasonable for its price of $17.99 CAD. We said our goodbyes and headed back to the hotel.

Today, we met with my father’s good friend, Uncle J, and his family for lunch and dinner. We enjoyed a hearty conversation about the latest with the families, news, and the current lifestyle and real estate in Toronto. We had dim sum at the Emperor’s Fine Restaurant with the usual dishes and desserts. Then, uncle took us to his home, where we enjoyed refreshments and desserts. Later, we stepped out to check out the mall.

We had made plans with my aunt to drive to Niagara Falls, which is about 2 hours away from Toronto. According to my parents, my brother and I have been there when we were little. Parking for the entire day was $20 CAD at one of the parking lots near the beginning of the falls.

The day was somewhat cloudy and humid so the spray from the falls was surprisingly comfortable. We walked with the crowd along the scenic road along the right side of the road. We had lunch at Hard Rock Cafe at around 2 PM, consisting of the usual hamburger and sandwich fare. 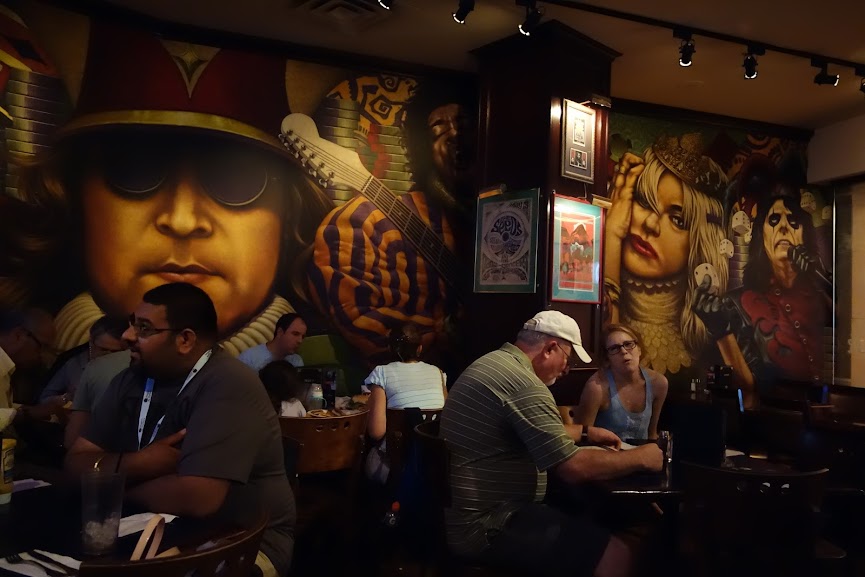 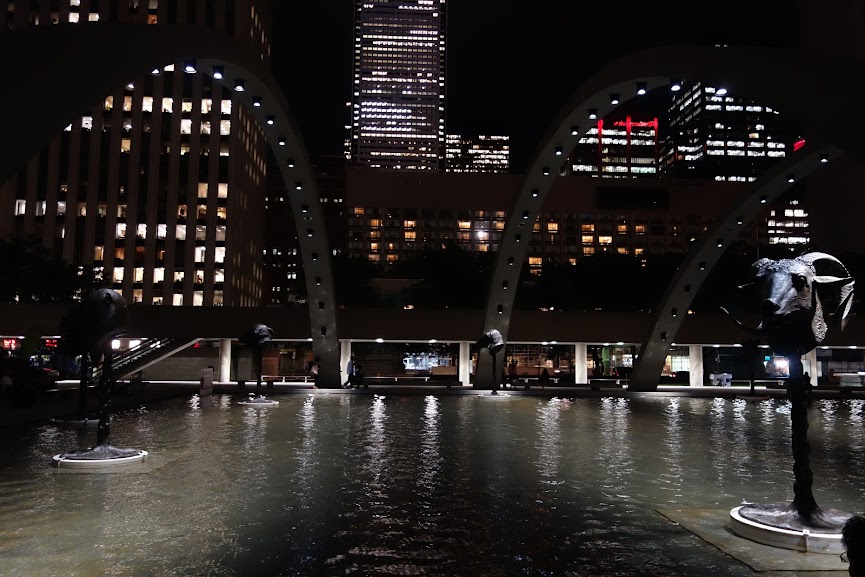 Afterwards, we walked back to the car on the left side of the road to look at the scenery there. By the time we got back on the road, there was traffic heading back to downtown Toronto.

As for August 9 to 10, we mostly spent our time visiting relatives and family friends, not much sightseeing. We did, however, enjoy a fusion blend of Chinese and Western food at City Hollywood Cafe (4372 Steeles Ave E, Markham, ON M1V 4S5, Canada).

Overall, it was an enjoyable experience visiting some of the major highlights of Toronto and my old residential area. Although we did not go to the other must-see sights, such as CN Tower and Casa Loma, it was sufficient to see our relatives and friends and enjoy the delicious cuisine in Toronto. Personally, the best Cantonese-style Chinese food is in Toronto (e.g. Richmond Hill and Unionville). For additional information, I suggest visiting this website.