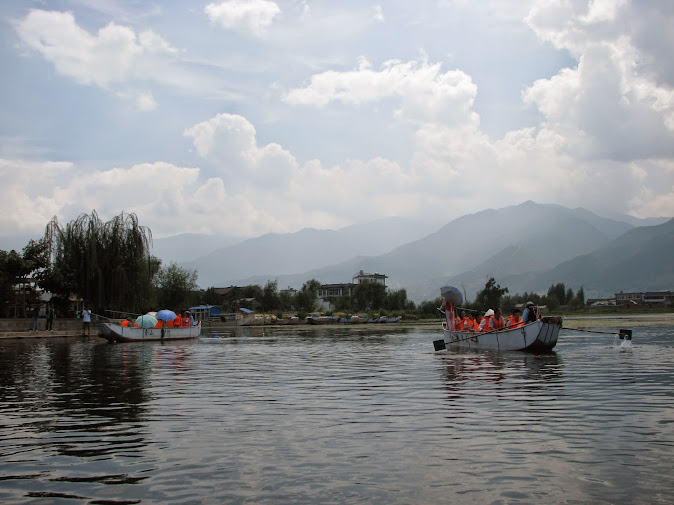 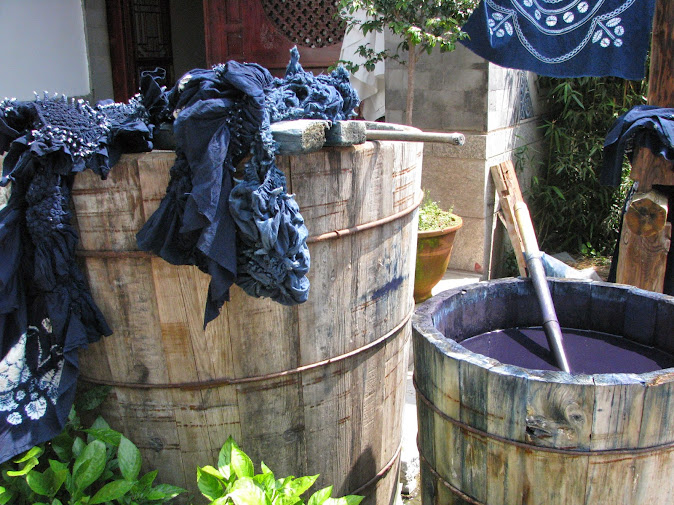 During our time in the village, we were able to understand more of Bai people’s lifestyle. Women dress in colorful, flowing dresses spun from handmade cloth and wear headdresses of silver with tassels or a hair ornament. Unmarried, young women would have two white tassels. If a man were to touch one of her tassels, it signified that he wished to marry the young lady. Married women do not wear tassels; instead they have their hair bounded up in a modest hairstyle. 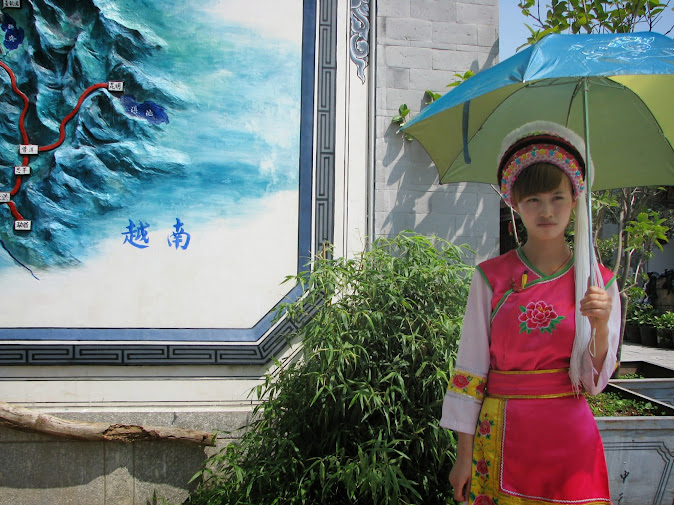 An unmarried young lady of the Bai people, Dali, Yunnan

The tea and marriage ceremony are two extra attractions, which require an additional charge of 60 RMB to the entrance fee. The story begins with two families hoping to make a match between their children, the eventual meeting of the couple, and the wedding celebration. 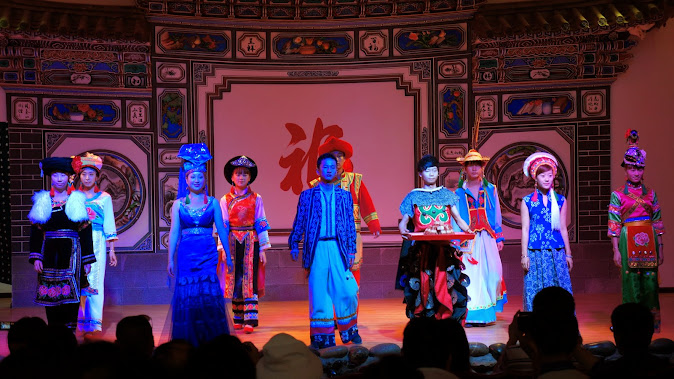 Marriage and tea ceremony of the Bai people in the village, Dali, Yunnan

The people dance and sing joyously sharing their jubilation. Afterwards, we went tea tasting. We tried various teas, such as pu’er tea, chrysanthemum tea, and teas for various ailments, including colds and hypertension.
Following our visit to the village, we went to the old town, where we took a rest at Clare’s Café and then visited the bustling market. 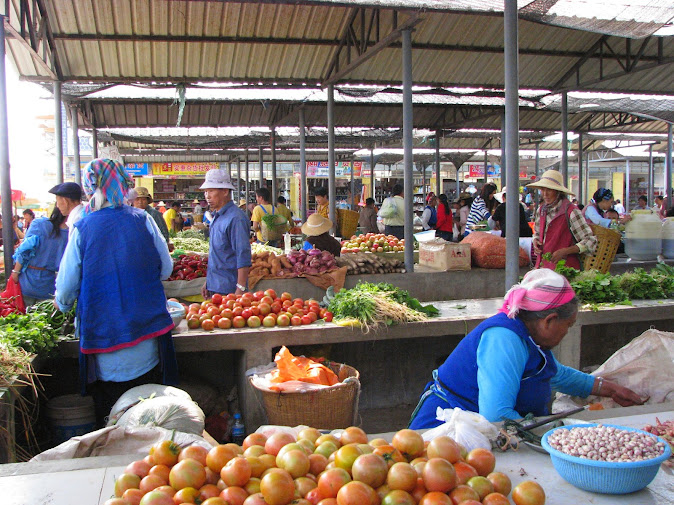 A busy market in Dali, Yunnan

We also visited the Yao people’s village, where they have an embroidery school. We watched several young girls and women stitch elaborate scenes with handmade silk thread. The silk thread is made from silkworm cocoons that are raised by the school. 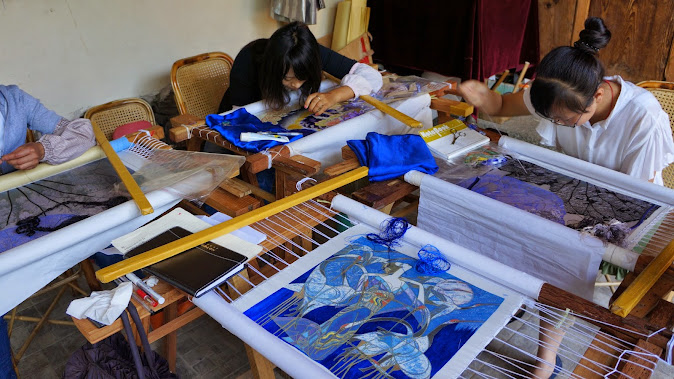 The young ladies of the Happy Embroidery School hard at work, Dali, Yunnan

After our visit, we had lunch in the village: a simple meal of stir-fried pork and chicken with peppers, steamed rice and vegetables.

The fisherman claims the fishy prize from the cormorant bird at Erhai Lake, Dali, Yunnan

Our guide took us for an exciting excursion on a boat in the Erhai Lake to watch the local fishermen using cormorant birds to fish.

Named for its shape like an ear, the lake is known for its beautiful mountainous scenery and pavilions that many poets have described in ancient times. Legend has it that a jade cabbage– its color from the jade color of the lake– can be found below the lake’s surface.  Oh, and you can try paddling the boat too if your captain lets you. 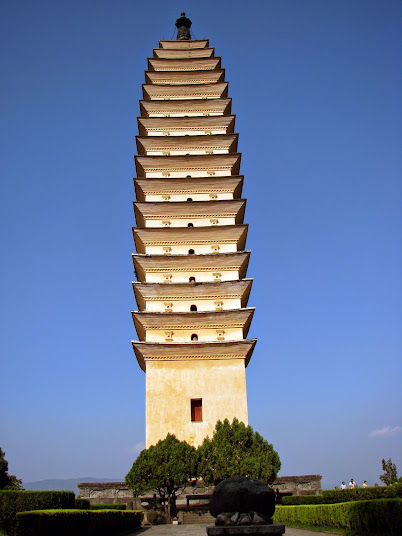 The large Tang-style tower (Qianxun Tower) has 16 floors, while the two smaller towers have 10 floors. Each tower is adorned with a roc that guards Dali from major flooding.

According to folklore, the dragon of Dali (river) respects the tower but fears the roc; therefore, the roc prevents flooding.
We were able to go into one of the towers and take a tour of the altars and Buddhist statues. 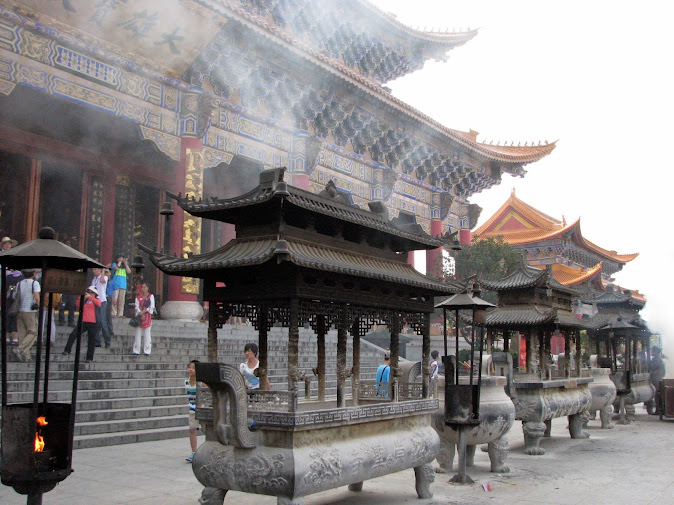 The Buddhist temples nearby the Three Pagodas, Dali, Yunnan 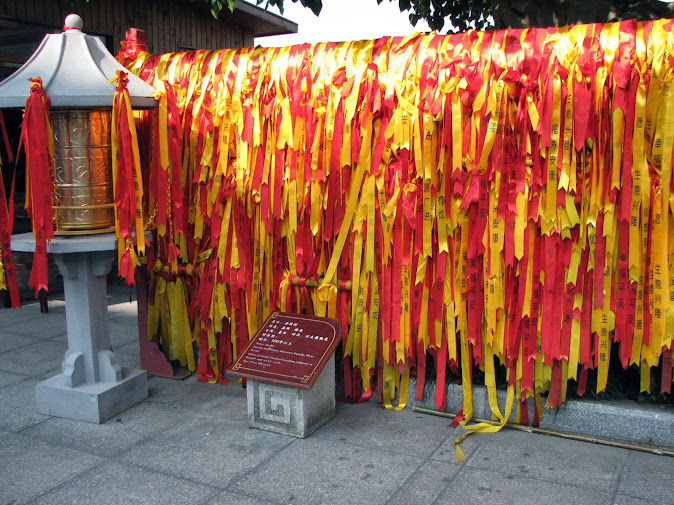 Prayers to Buddha and the Bodhisattva, Dali, Yunnan

While the sights visited were pleasant, our tour of Dali felt rushed since the next day we had to leave for Lijiang. We did not have enough time to visit the Butterfly Spring, where in ancient times, two Bai lovers drowned themselves in the nearby pond and became a pair of butterflies to escape feudalism. The sight, according to my aunt, is very poetic and inspiring.