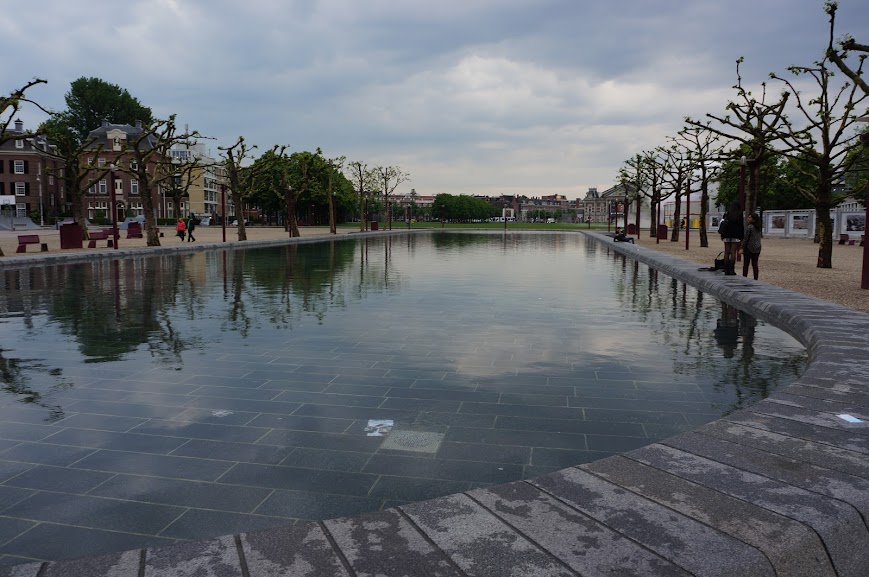 Park in the Museum-Kwartier, Amsterdam, Holland (2014)

Ring! Ring! The sound of a bicycle bell snaps me back to attention as I allow the bicycle to pass. Here in Amsterdam—along with its busy, winding cobbled streets and canals—the bicycle is the most common form of transportation. In the early morning, from the veranda of Hotel Aalders, one can hear the soft pedaling of several bicyclists heading for work or school. From the hotel, if one heads down the street and around the corner, one can see the hubbub of parents on bicycles taking their children to school. What surprise to see mothers in heels skillfully maneuvering their bicycles and charges through the traffic to school!

Prior to our tour with Trafalgar, my family and I arrived four days early in Amsterdam to explore the city on our own. We stayed at Hotel Aalders, conveniently located in the Museum-Kwartier (Museum Quarter) within walking distance of the Rijiksmuseum, Van Gogh Museum, diamond factories, and Stedelijk Museum. Public transportation in Amsterdam is very convenient—a tram cuts through the center of the city, making it easy to visit the important sights of the city.

Tip: If you are planning to stay at least 3 days and 3 nights in Amsterdam, it may be wise to invest in the I amsterdam city card. The perks are unlimited public transportation usage of the metro, tram, and bus; and some free admissions or discounts at participating vendors/restaurants. There are three options: 24-hour, 48-hour, and 72-hour cards. See the official website for details. 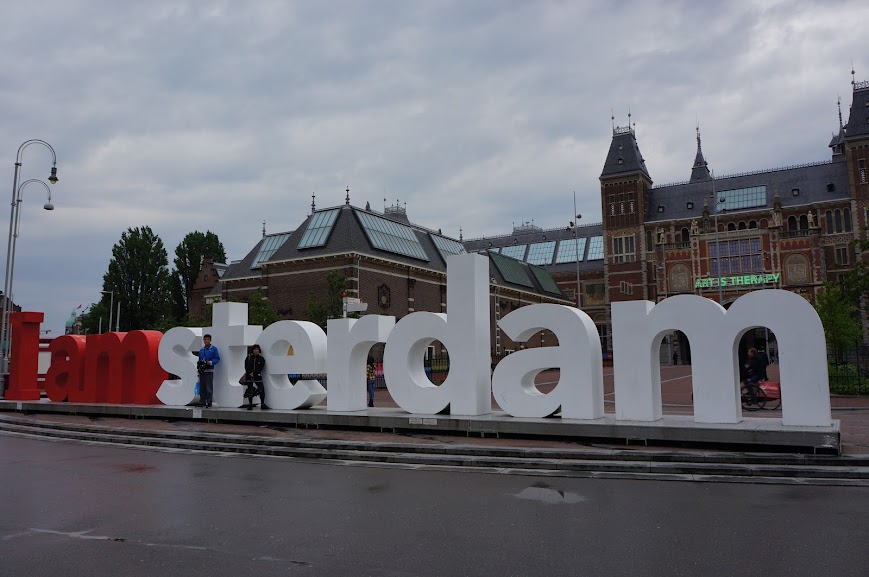 I amsterdam letters in the Museum-Kwartier (2014)

On the dreary morning we arrived, we checked in at the hotel and then took a walk in the Museum-Kwartier. We passed by the closed museums and headed to the iconic I amsterdam letters, where we took photos. Passing through the tidy park, we passed by the ornately decorated Rijksmuseum as we headed towards the main city center. 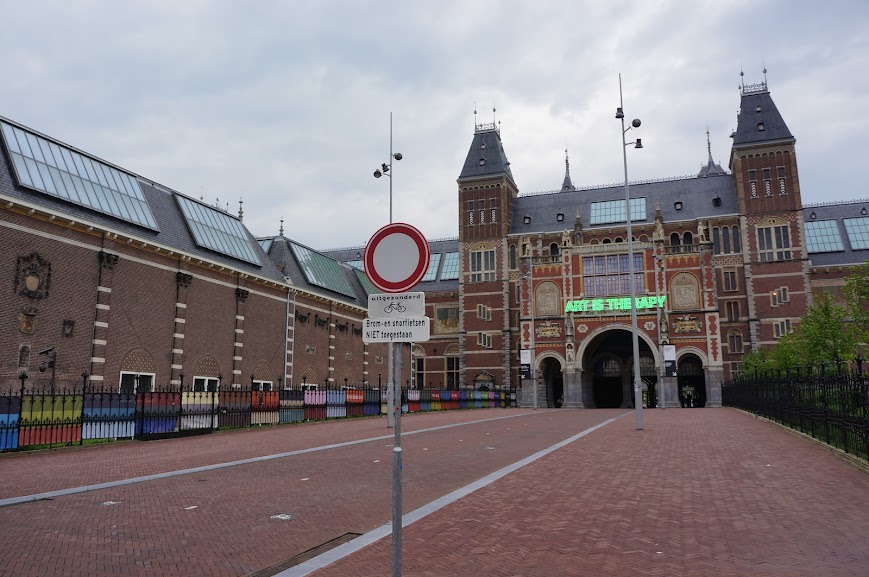 It was around seven at night and the shops were closing but the streets were still lively with pedestrians. After some deciding, we went to the Hard Rock Café for dinner.

Afterwards, we enjoyed a scenic tour of the city at night. The views are spectacular, especially the view of the Flower Market at night. 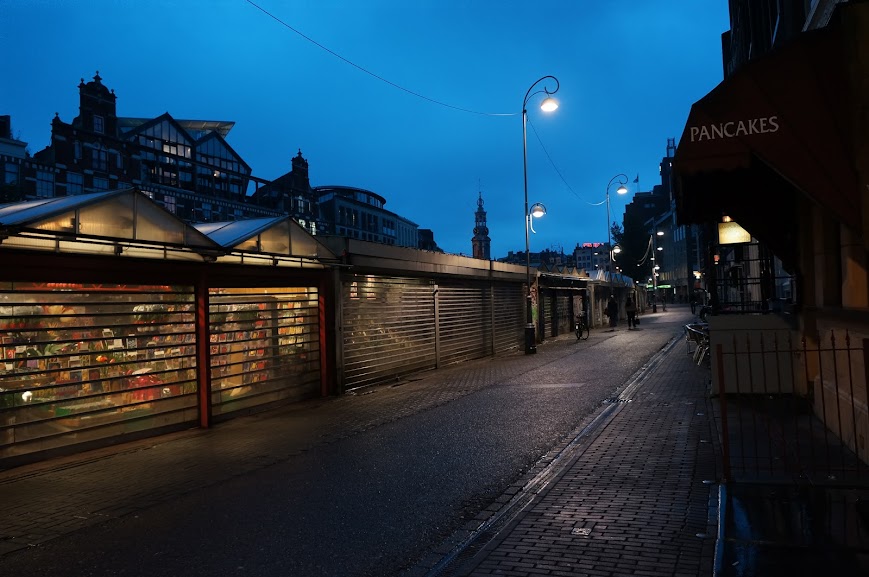 The following day we visited the Van Gogh Museum. The museum houses five well-known pieces; most notable is the Sunflowers (1889). Here one can learn about Vincent Van Gogh’s painting techniques and how he progressed as an artist. There is also a selection of Van Gogh’s contemporaries and workshop opportunities. The museum was very informative. After exploring the Van Gogh Museum, we took the tram to the city center to the Anne Frank Huis (Anne Frank Museum). This museum is the original warehouse, where she and seven other inhabitants hid during World War II to escape persecution. Visiting and walking through the Secret Annex allows you to visualize her frightening experiences as detailed in her diary. Since the Anne Frank Huis is close by the main shopping and restaurant area, we stopped by for a late lunch at the Villa Zeeizaht—pasta and soup. For dinner, we tried the traditional Dutch cuisine, specifically the stamppot, a Dutch dish of mashed potatoes and stewed meat in rich gravy. It was delicious but quite filling and kept us warm during the rainy weather.

For the next two days, we took the train from Centraal Station to Utrecht (May 28) and Haarlem (May 29). Both of these cities are within 20-30 minutes of Amsterdam and are worth visiting. On the final morning on our own, we visited the Stedelijk Museum—the museum of modern art. For those enthusiasts of modern art, this is a treat. If you have the I amsterdam card, you can receive a discount on the ticket price. — With the Trafalgar Tour, we went on a canal cruise starting outside of the Centraal Station through the city and past major landmarks, such as the Flower Market and ancient bridges.

We also visited the Rijksmuseum to see Rembrandt’s famous masterpiece, The Night Watch, and other notable works. The museum also houses a couple of Johannes Vermeer’s works—Woman Reading a Letter and The Milk Maid. According to our local art guide, the Dutch people pride themselves on commissioning portraits of themselves and their family; back then, it had cost 350 guilders for a portrait.

Afterwards, we went to the Gassen Diamond Factories. Here we learned how the diamonds are cut and graded based on their shine and weight.