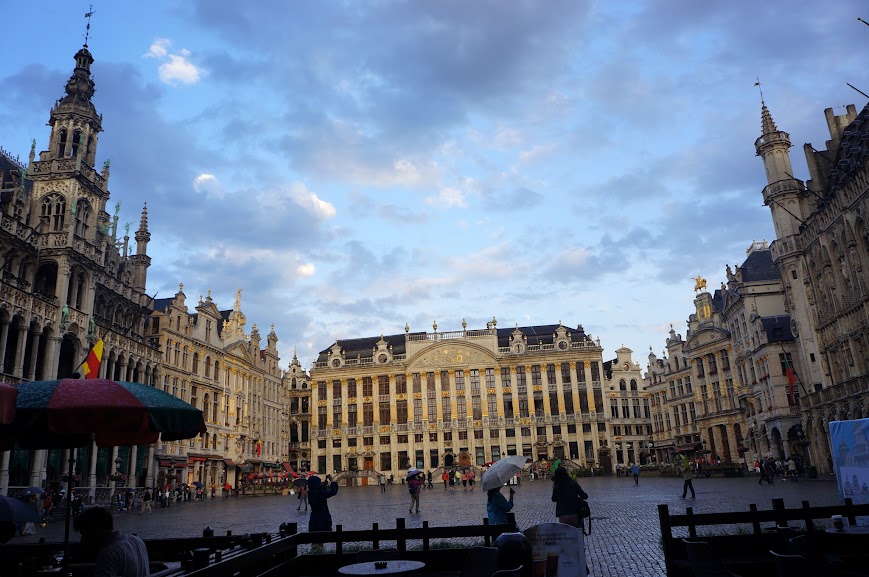 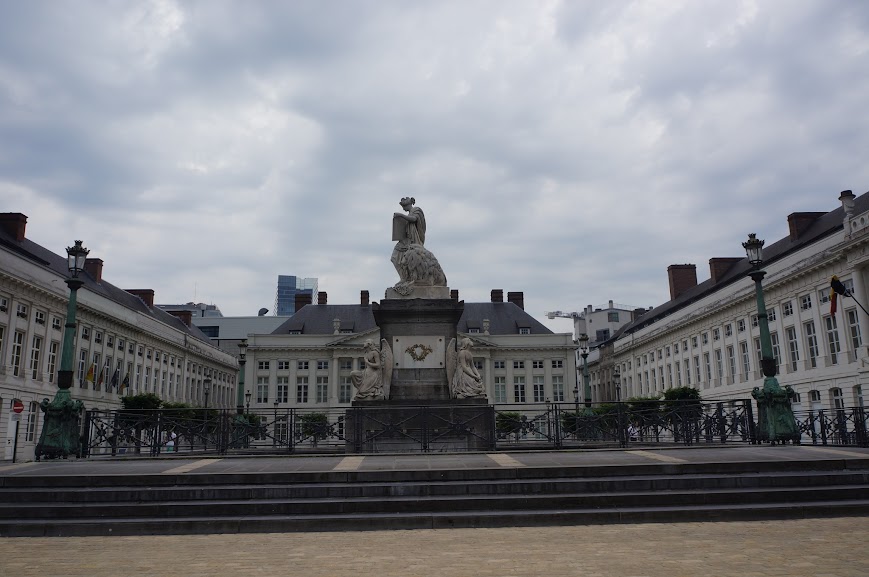 As one enters the city of Brussels, one comes upon a marvelous sight of the Atomium—a structure of nine spheres that was the futuristic vision of the World’s Fair of 1958. Today, it is one of the best places to get a 360-degree panorama of the city. In addition to great views of the city, there are a few nice parks for strolling; the Brussels Royal Park located near the royal palace on Rue Ducale has several beech trees that line the pedestrian walkways for shade. 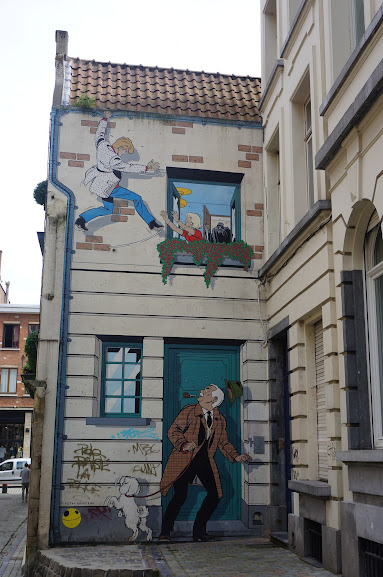 The tour guide then gave us a quick walking tour of the main city center, where we declined to do the chocolate and beer tasting and went off on our own. Later that evening of June 7th, we participated at the farewell dinner with our tour group members. After June 7th, we stayed three more days in Brussels at 9Hotel (http://www.le9hotel.com/en/brussels-central/) and explored Louvain-la-Neuve for a visit to the Hergé Museum (June 8).

The city center of Brussels has many places to see and explore.

For comic lovers, there is the Comic Trail walk that can take you on a sightseeing tour of many murals of famed comic book characters. The walk will also take you to the shopping district found along Blvd Anspach, where you can find several comic stores. You can actually spend the whole day following the trail and possibly having lunch and dinner in the areas you explore.

For general exploration, the city center is the ideal place to start. Following any of the roads from Grasmarkt, one will head towards Le Grand Place, the main square that is ornately decorated by rich architectural wonders. Unfortunately, during the time we went, the building facades were being renovated.

A historical building under renovation at Le Grand Place in Brussels, Belgium (2014)

From Le Grand Place and following tourist crowds, we made our way to the iconic figure of Brussels… Manneken Pis. 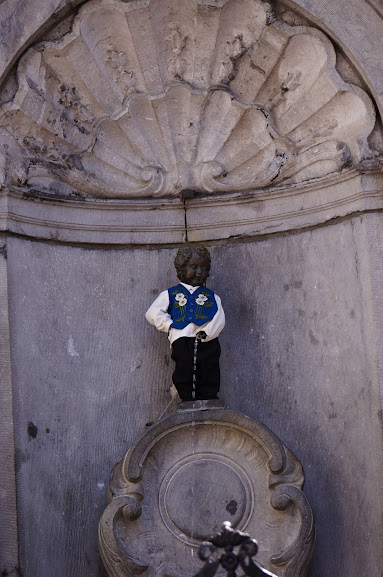 Standing at 61cm, this bronze statue from the 17th century is the center of attention. During festivals or holidays, the statue is adorned with a costume. Previous costumes can be found at the City Museum located opposite the Town Hall in Le Grand Place.

Around the square of the iconic statue, you can try the classic Belgian waffle for 1 euro or perhaps buy chocolate or souvenirs in the image of our friend here. It was well worth it! 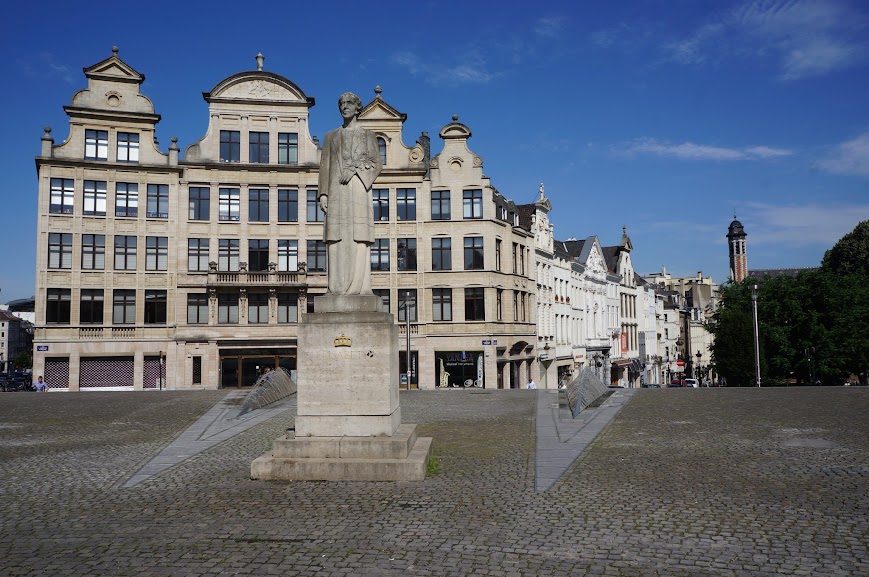 During one of our days in Brussels, we walked past the Place de l’Albertine (where the statue of Queen Elisabeth is located) towards the Fountaines au Palais des Congres and the Royal Library. At the top of the steps at the far end, one can get an awe-inspiring view of the city or perhaps a nice sunset. 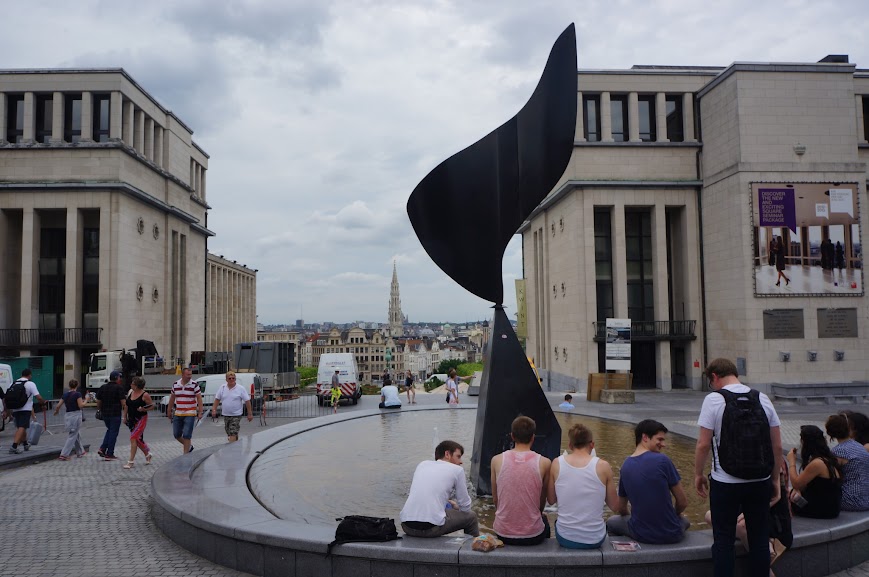 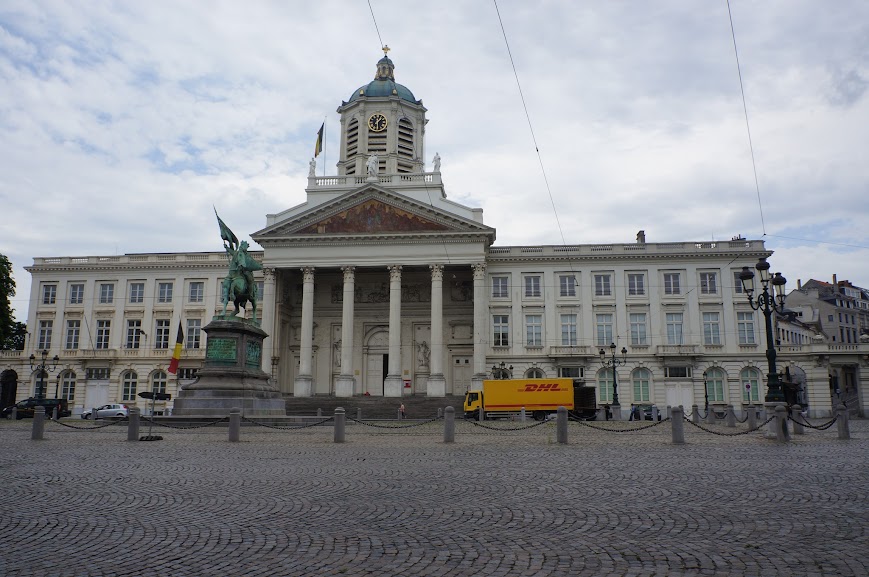 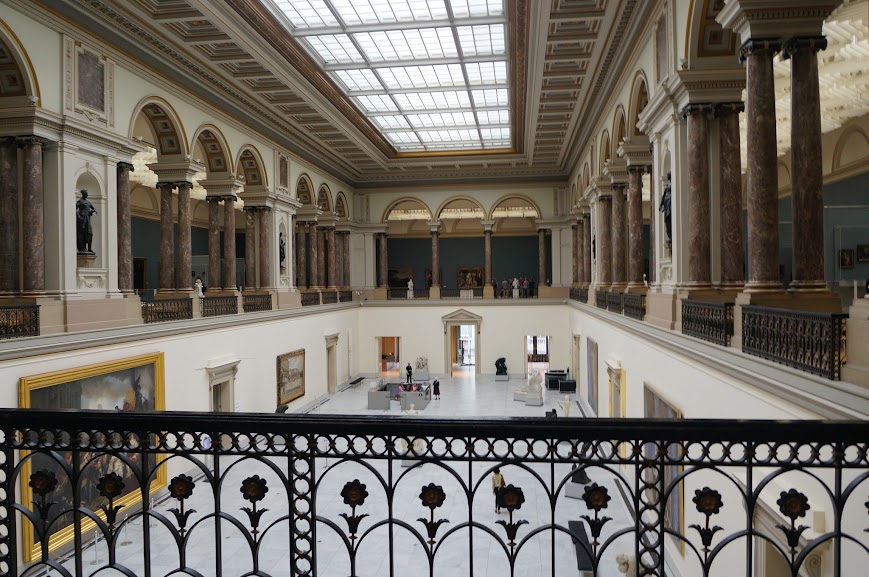 Further up the hill is Rue Royale, where Belgium’s Royal Museums of Fine Arts are located. We bought the “combi” ticket that allows one to visit all four museums: Magritte, Modern, Old Masters, and Fin-de-Siècle. Due to time constraints, we visited only the Magritte and Old Masters museums. 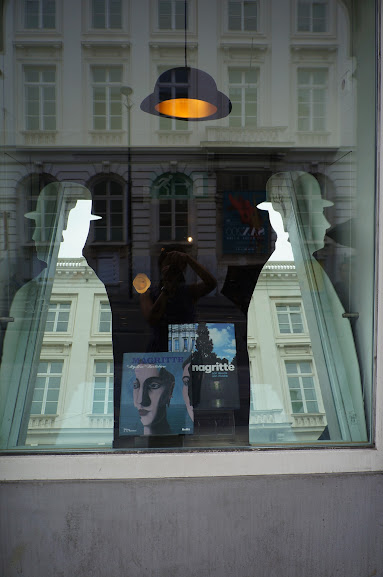 Display of Magritte in Brussels, Belgium (2014)

The Magritte museum gives a comprehensive understanding of the Réne Magritte’s life and development of his surrealist technique throughout the years. The museum boasts the largest collection in the world. 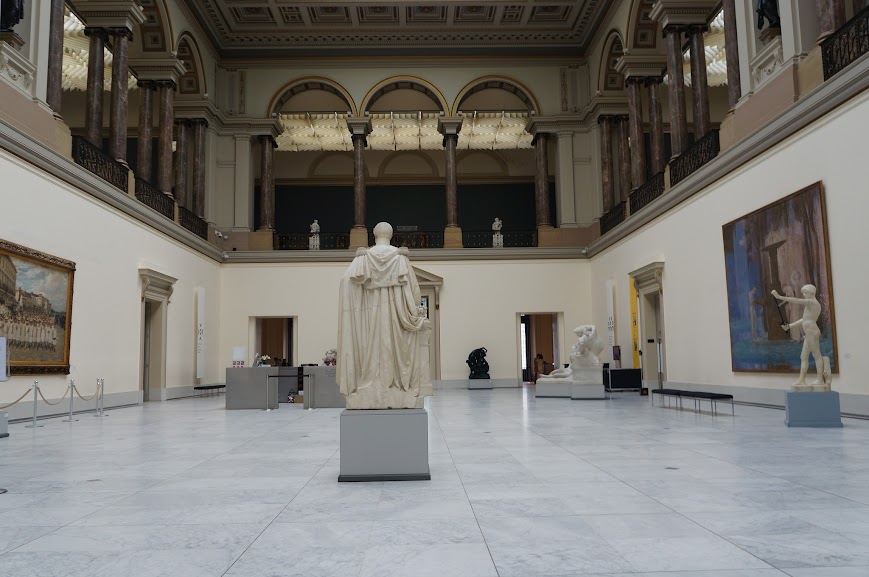 The Old Masters museum contains a vast array of Flemish and Southern Netherlands artists from the 15th to 18th century. The collection is worth seeing if you are a fan of art history.

The cuisine in Belgium is quite similar to that of the Netherlands, consisting of potatoes and cured meats. There are also plenty of European cuisines, such as Italian and French. 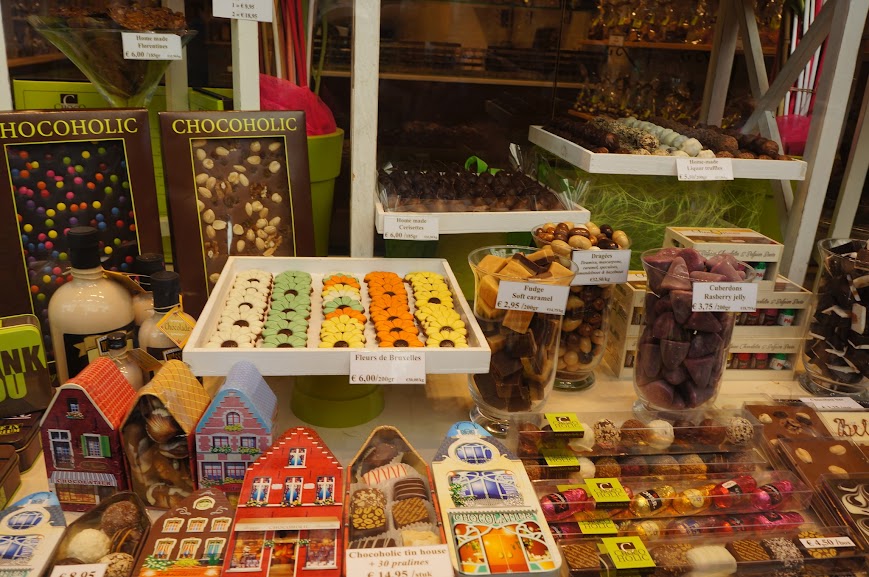 Chocolates for the Chocoholic in Brussels, Belgium (2014) 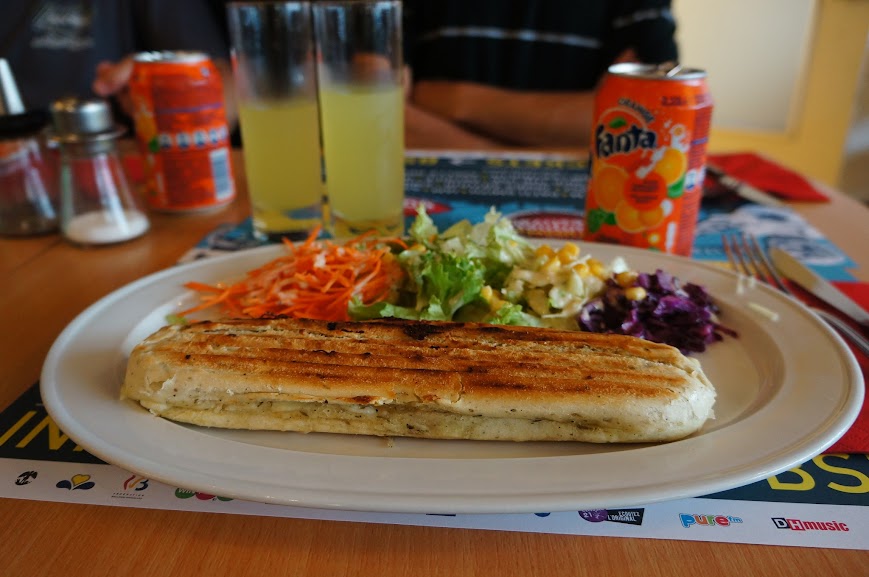 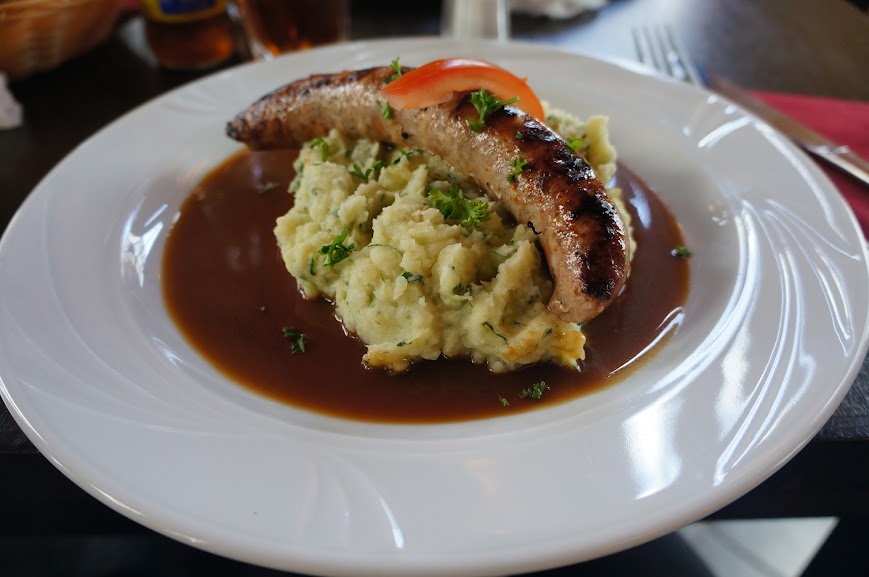 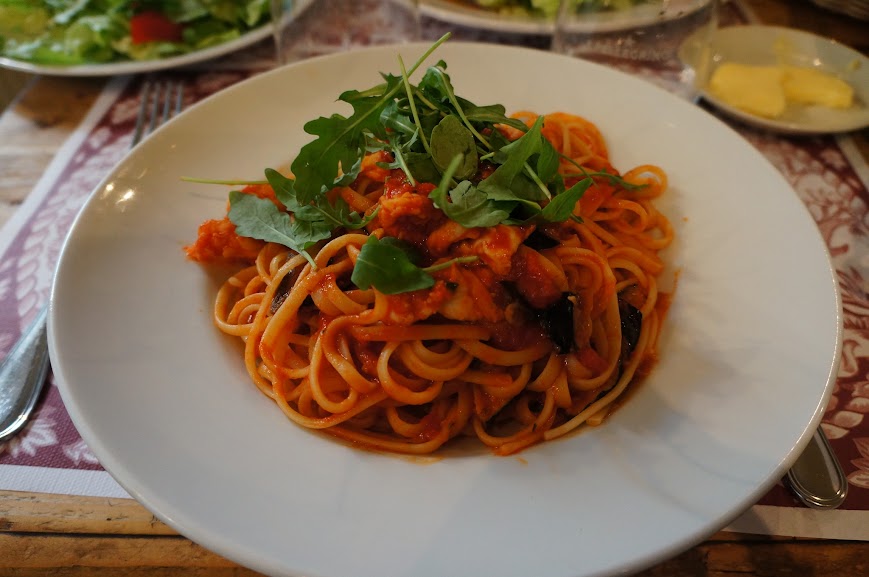 Overall, the trip to Belgium was worthy of attention. The museums were the main highlights, allowing us to delve further into the history of Europe. It gave us an appreciation of the similar but distinct cultures of Belgium and the Netherlands and how they developed into the characters they are today.