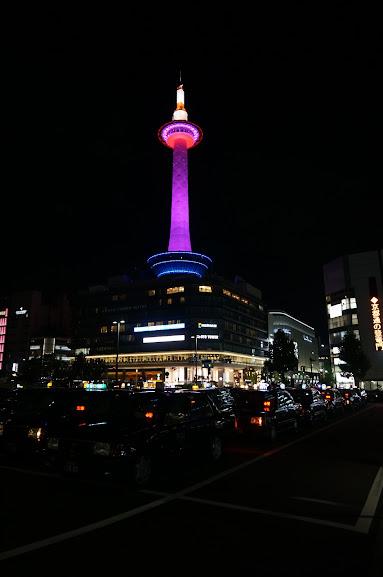 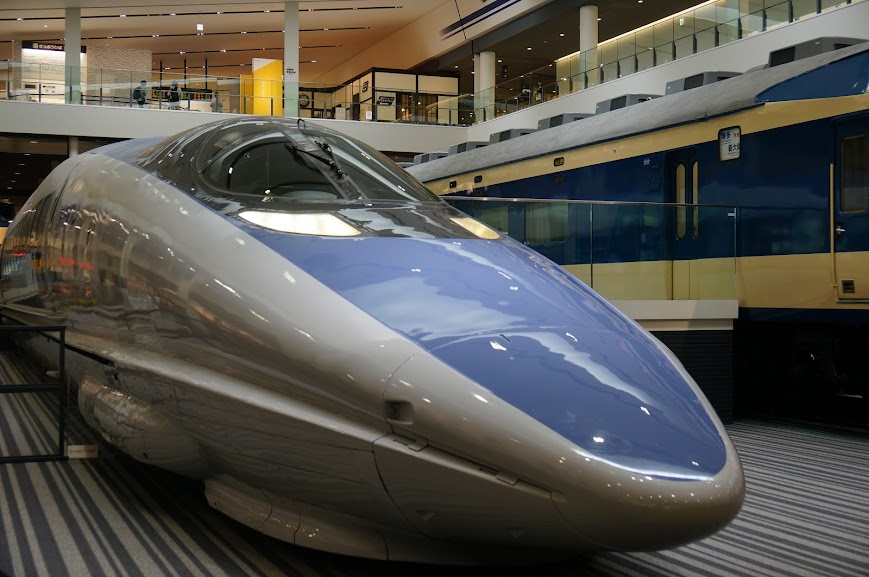 Kinkakuji is a Zen temple located in the northern part of Kyoto. Originally the home of the shogun Ashikaga Yoshimitsu, it later became a Zen temple after his death in 1408. Although one is not able to go inside the structure, one can admire the simple but ornate structure. The exterior of the top two floors is covered with gold leaf and capped by a golden phoenix. Past the structure is a garden, where one can take a tranquil walk and end at the Sekkatei Teahouse. Next to the teahouse is a public shrine, where one can sound the prayer bell, pray, and observe the monks in their prayer session. 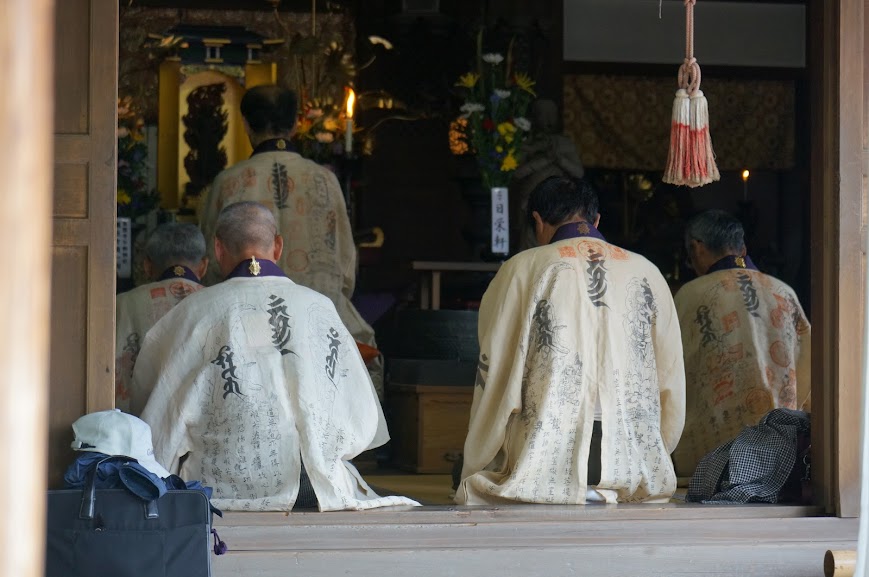 For fun, one can get a fortune from one of the machines for 100 yen. During the time we went, it was not as crowded but the weather was quite warm. Luckily there was an ice cream vending machine nearby, so we got ourselves some cold treats.

From Kinkakuji, we took a taxi to Nijo-jo (Nijo Castle). Built in 1603, this castle was the residence of Tokugawa Ieyasu, the first shogun of the Edo Period (1603-1867). The castle was expanded by his grandson, Iemitsu, 23 years later. The castle has three main areas: two circles of defense, the Honmaru and Ninomaru, and some gardens; all of this is surrounded by stone walls and moats. One enters the castle area, Ninomaru, through the Karamon Gate, a wooden gate decorated with gold leaf designs and motifs. 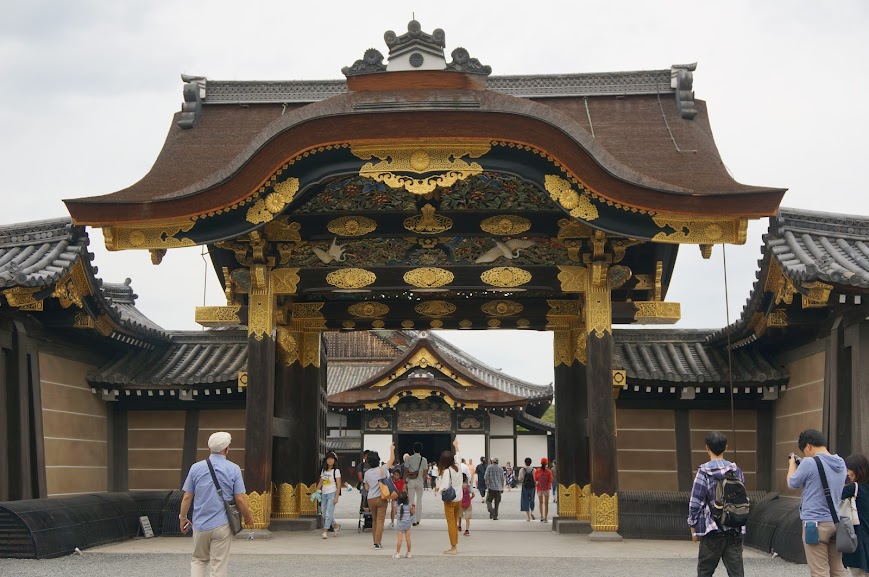 Here one can see the interior of the Ninomaru Palace, which requires an additional fee and for visitors to remove their shoes. The Ninomaru Palace was the residence of the shogun during his visit to Kyoto. While at first glance the building looks modest and nondescript, the interior of the palace is worth touring to see how the people lived during that time period. Following the footsteps of the countless people who walked in the palace, one passes by multiple waiting and audience rooms. A few of the rooms had decorated sliding doors. Higher ranked visitors were allowed into the main audience room, where the shogun would sit on the elevated floor, guarded by bodyguards hidden in closets. An interesting part of the palace is the squeaky floors called nightingale floors that warn of intruders.

After touring the palace, one can walk through the Ninomaru Garden, a traditional Japanese garden, and then to the other part of the castle, the Honmaru. Originally the site of a second palace complex and a castle keep, only the Honmaru Palace still stands there today; the rest was destroyed and never rebuilt. While the Honmaru Palace is not open to the public, one can climb up the stone foundation of the former castle keep to get a great view of the castle grounds. During the spring and autumn seasons, one can see the cherry blossoms and autumn colors, respectively, at Nijo-jo. 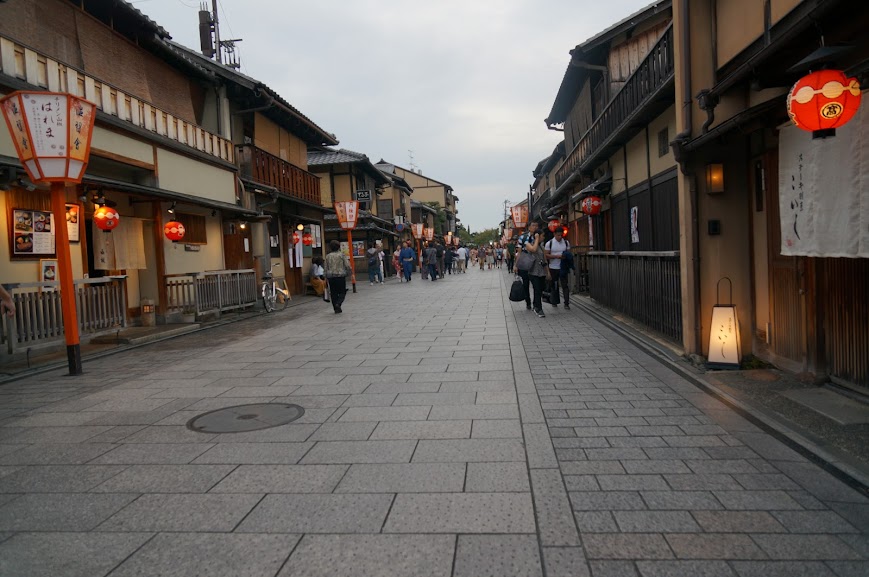 The last area of Kyoto we visited was Gion-Shion, the entertainment district renowned for its historical merchant buildings, eateries and, of course, geishas. We walked around the area until around 5PM and waited along the side streets to catch a glimpse of the geishas and their apprentices, maikos.

Note: One should be courteous when taking photos and not surround or interrupt the geisha or maiko on her way to work.

As the sky darkened, we decided to find a place for dinner. Finally, we went back to Kyoto Station, where we went to the nearby underground mall and had dinner at a Chinese restaurant before taking the shinkansen back to Osaka.

I enjoyed visiting Kyoto by far, as it was one of the most historical cities in Japan. One day is not enough to explore all of the sights and sounds in Kyoto. It is best to have about three days. Places that I would someday like to visit include the Philosopher’s Walk, Kiyomizudera Temple, and the Fushimi Inari Shrine. For fun, it would have been interesting to visit the Toei Uzumaza Eigamura (also known as the Kyoto Studio Park or Movie Land), a film set and theme park of historical movies and television dramas.